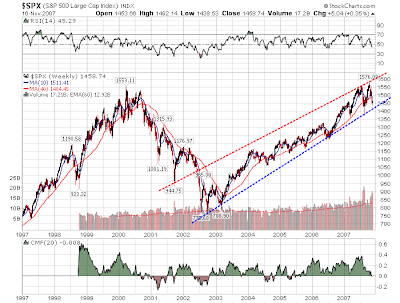 Number of New Lows on NYSE above 450

This chart shows the number of NYSE stocks that are making new 52 week lows (red spikes) plotted with the S&P500 in black. You can see from the chart that spikes above 450 new lows are fairly rare. Last Friday (Nov. 9, 2007) the NYSE made a second spike above 450 in just a few months!

Click to see full sized chart courtesy of stockcharts.com
I believe this chart is more evidence that the market is trying, as odd as it seems near all time highs for the averages, to make a very major bottom similar to the 1998 and 2002/2003 bottoms.

Most really good bottoms before major advances are double or triple bottoms. 1998 was a double bottom and 2002/3 was a triple bottom with two significant lows made in 2002 and a test of those lows, about 4% higher, in 2003.

Also of note is this attempt to make a major bottom is coming on what I call a test of the breakout above the 2000 highs.

The bears will say the market is making a double top before crashing as the market comes apart.
Posted by Kirk Lindstrom at 6:02 AM

Often compared to legendary Warren Buffett, Jim Cramer's college buddy Eddie Lampert made a big bet on Citigroup that has not looked good in the short-term. A New York Times article today reports:

In August, a hedge fund controlled by Edward S. Lampert, the value-oriented investor, disclosed that it had built a $1.3 billion stake in Citigroup, the beleaguered financial giant.

In the last year, RBS Partners, an affiliate of Mr. Lampert’s ESL Investments, has steadily poured money into Citigroup shares. As of March 31, it valued its stake, then about 15.24 million shares, at $782.6 million. It increased that stake to 24.8 million shares by June 30, giving its Citigroup holdings a value of about $1.3 billion, regulatory filings show.

Not only did Eddie Lampert, like Citigroup when it was much higher, his buddy Jim Cramer thought Citigroup was a great stock to buy at $53, collect the dividend and wait for it to go higher with a new CEO or announcement of a break-up. In the July 17th, 2007 article, "Cramer's Take on Eddie Lampert's Stocks," Jim is quoted as saying of Citigroup:

"For the life of me I don't understand why everyone isn't buying Citigroup. You've got a much better than average yield," Cramer said in a June 21 RealMoney blog post. "You have a management that doesn't have a clue and could be gone in an instant, which would mean you could pick up a quick $3 or $4. You have a company that could be a big gainer worldwide, and it is a ROWer (that's rest-of-world, for those who've missed my thousand references to it)."

"I am blown away that this stock has been stuck at $53 with all of these positives lurking. This isn't Bank of America (BAC) , where you can only hope that they stop buying things. This is one of those stocks where you could have a dramatic move up on any talk of a breakup or a change at the helm, and in the meantime you will get paid to wait."

With Citigroup, I've made a lot of money in my newsletter explore portfolio buying back in Sept 30, 1998 AFTER it crashed from the mid $30's to the teens. I sold enough shares to be on "house money" but I would have done better to have sold in 2000 when it hit the mid $50's before falling 50% to make a bear market low in 2002. That is not my style.

I like to buy great companies when they go on sale, the same way I buy pants and shirts at Macys (M) after holiday markdowns. After holding all through spring and summer, I am wearing a $58 Merino wool polo sweater-shirt now that I bought last year for $15 the day after Christmas. Even if Citigroup goes lower, you should be able to wrap up some shares now, collect the dividend and brag about how smart you are in a year or two when we get past this subprime mess and the stock has recovered.

Since 2002, Citigroup rallied again from the mid $20's to a new all time high in the mid $50's before the sub prime meltdown crushed the stock into the mid $30's. Yesterday, Citigroup clsoed at $33.41, at another major support line shown on the graph below. 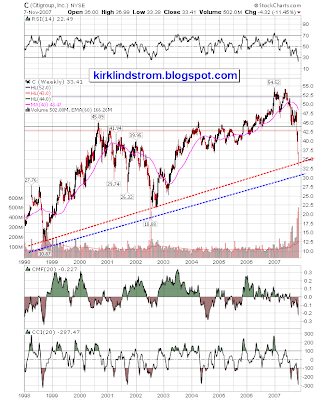 Click to view larger graph
I've held all along and collect the dividend. I hope and believe this is yet another great buying opportunity, but I'll get no "trader points" for being a long term buy and holder on Citi, which is what I often do once I am on "house money" for stocks.

Note: I also own Citigroup in my personal portfolio. I may add shares here but I have yet to decide. Yesterday I added to my SPY position using profits taken in my international mutual funds. SPY is the ETF for the S&P500 which has a significant weighting in the financial sector.

11/08/07 8:15AM PST Update: Here is a chart I found at "SeekingAlpha: Citigroup 'Crisis': Some Perspective Is In Order" showing the same support line with the "crisis of the day" listed. 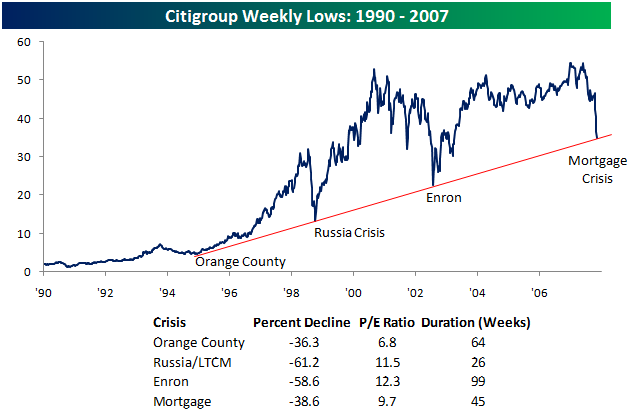 Click to view larger graph
Are you one to say "this time it is different?" I hope not.
Posted by Kirk Lindstrom at 6:42 AM

Newly issued Series I Savings Bonds (aka iBonds and I-Bonds for "Inflation Protected Bonds") will pay 4.28% and Series EE Bonds will pay 3.00%. I-Bonds are a 100% safe way to defer taxes while getting inflation adjusted return for up to 30 years. These rates for new bonds are effective from November 2007 through April 2008.

More Information and links at "I Bonds Explained"

Earnings rates for I bonds and fixed rates for EE bonds are set each November 1 and May 1. Interest accrues monthly and compounds semiannually. Bonds held less than five years are subject to a three-month interest penalty. Both series have an interest-bearing life of 30 years; the EE bond fixed rate applies to a bond's 20-year original maturity.

The earnings rate for I-Bonds is a combination of a fixed rate, which applies for the life of the bond, and the semiannual inflation rate. The 4.28% earnings rate for I bonds bought from November 2007 through April 2008 will apply for their first six months after issue. The earnings rate combines a 1.20% fixed rate of return with the 3.06% annualized rate of inflation as measured by the Consumer Price Index for all Urban Consumers (CPI-U). The fixed rate applies for the 30-year life of I bonds purchased during this six-month period. The CPI-U increased from 205.352 to 208.490 from March through September 2007, a six-month increase of 1.53%.

Here is what older iBonds will pay, based on their base rate with the latest inflation adjustment

Ask questions at our iBond Discussion Forum at Facebook's "Investing for the long term" group.
Posted by Kirk Lindstrom at 10:15 AM

October Job Growth Strongest Since May 2007

The US Labor Department reported today the best job growth since May 2007. Despite the weaknesses in the housing and credit markets, the US economy created 166,000 net new jobs in October 2007. Of those new jobs, 130,000 were created by the private sector. Growth was strongest in health care and temporary help while manufacturing and construction continued to lose jobs.

August and September job growth was revised down by 10,000. Only 96,000 new jobs were created in September.

The unemployment rate for October held steady at 4.7% as the economy created just enough jobs to absorb new workers.

Offsetting the good news, a separate “Household Survey” of 60,000 households showed a loss of 250,000 workers, the third decline in the last four months.
Posted by Kirk Lindstrom at 5:52 AM