GE: General Electric's CEO Immelt Invests Another $5 Million Of His Own Money In GE Stock

Following insider buying can be a great way to make money even in a falling market. Major insider buying at General Electric (GE) could yield similar gains to patient investors as we have seen with Valence Technology (VLNC).

Yesterday number one insider at General Electric, chief executive officer Jeffrey Immelt, bought 62,000 more shares of GE stock worth $2.04 million at an average price per share of $32.93 according to SEC filings. Immelt told investors that GE should outperform the Standard & Poor's 500 index this year in a "challenging'' environment.

In an annual letter to shareholders released today, Immelt wrote:

On why GE won't sell NBC:

Here is a 5-year summary of insider trading by Jeffrey Immelt and a graph. 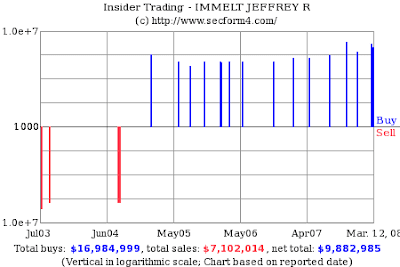 When insiders use a significant amount of their own money to significantly increase their holdings in the company they work at, then we should pay attention. Valence Technology is a stock with significant insider buying that has recently doubled. This chart of VLNC insider buying is from the Feb. 22, 2008 article "CSCO: Open Letter to Cisco's Board of Directors." 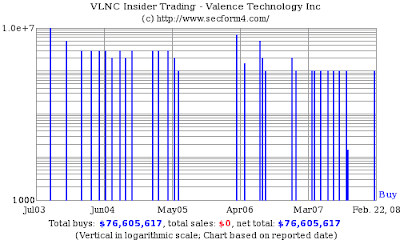 Valence is one of many technology stocks that have been in a prolonged bear market decline after peaking in early 2004. That didn't stop insiders from buying and now they are being rewarded.

GE is a great international play as more than half its sales come from outside the US with about $40 billion of the $195 billion total coming from emerging markets.

In the 1976 movie "All the President's Men" on how to uncover the details of the Watergate scandal, Deep Throat told reporter Bob Woodward "I'll keep you in the right direction if I can, but that's all. Just... follow the money."

Discuss this article and GE in general at our facebook "Investing for the Long Term" forum called GE: General Electric "We Bring Good Things to Life"

Posted by Kirk Lindstrom at 7:14 AM