Have you ever gone back to check if using the EOD numbers is better than taking a signal intraday? I wonder because of time periods that involve chop.

I get out of the Spiral now & then because I tend to be watchful of impending chop. I guessed it was coming after Tuesday & seems that's what we have, although tomorrow should start a seasonally bullish time frame.

Click Chart courtesy of Stockcharts.com to see it full sized 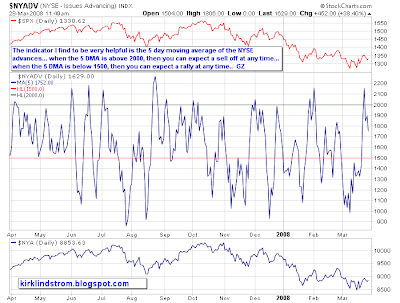 Patrick Slevin (no network) replied to Ground's post2 hours ago.

Thanks, that would tend to help with respect to chop.

I'd been looking at an Advance.Decline Ratio (which calculates the ratio between advancing versus declining data sets).

Can't say that it's been helpful, so I drifted away from A/D charts these past few weeks. However you've given me new hope.

Ground Zero (no network) replied to Patrick's post 2 hours ago.

Pat, the ratio is not as sensitive as the simple DMA, and also the decline data is a variable which only contaminates the data, the decline figures mean nothing and only gets in the way... the only figure than means anything is the advances... I keep the 5, 10, 20, and 50 DMA of the NYSE advance ONLY... you will see how nicely it works for the day to day moves... I use the spiral for the general direction, then I can focus in more closely with the 5 DMA of the NYSE advances...

A good example is when prices reach the WP and the 5 DMA is above 2000, then you know we've seen the highs for a while...

For more information or to ask questions: Join Spiral Forum: Trading Futures with Groundzero at Facebook
.
DISCLAIMER: All comments, replies, and opinions are general in nature, they are not meant or intended as specific investment advice to anyone, and certainly do not represent the opinion of anyone but Ground Zero. Individuals should consult with their professional advisors for specific investment advice. The spiral model is strictly experimental in nature and should not be used for trading purposes except by those individuals who have a fluent working knowledge of its abilities, mechanisms, and limitations.

Posted by Kirk Lindstrom at 8:50 AM