Today Jim Cramer was on Erin Burnett's "Street Signs" (Erin Burnett Fan Club) show to say he was not bullish on Bear Stearns (BSC) last week. He said he was only telling the person with the question to not take their money out of the brokerage.

"Bear" closed today at $4.81 as hopeful investors think they might get more than the $2 per share JP Morgan announced they will buy Bear Stearns for. (See J.P. Morgan Chase buys Bear Stearns for $2 a share )

Tuesday with BSC at $62.97, Jim Cramer took a call from a viewer asking about Bear Stearns liquidity problems. This was his reply.

Watch the video here to decide for yourself.

There has been a ton of message board discussion today about Cramer's "bullish call for Bear" last week. To answer the questions, this is what he told Erin Burnett:

“Look, let’s understand two things,” Cramer said. “I said the common stock was worthless on Friday, as soon as this thing was at 36 because we saw a look at the bonds. If you kept your money in Bear you made out. You got the liquidity. Keeping money at Bear – I guess I could have caused a run on the bank and said take your money out of Bear. I guess people could say hold it, he’s saying buy the common stock. I mean, what the heck. I cannot cause a run. It turned out the Federal Reserve guaranteed the money. I’m not going to tell people to pull money out of these places. The Federal Reserve is guaranteeing the money. They are not guaranteeing the equity. I got a lot of things wrong in my life, but I don’t regret the fact when I said don't take your money out of Bear. If you have your money in Bear you still got it today. Remember, there’s Bear Stearns the common and that person was going to pull the money out of Bear. We got a guarantee. J.P. Morgan is now Bear.”

I checked SeekingAlpha for their daily recap. It is called

The TITLE says "Bullish on Bear" and it shows in the URL....

“If you’re a diversified investor, you’re not going to get hurt. Those who only had their money in Bear obviously will get wiped out today."

hmmmmm..... Maybe we should ask Bill Clinton what "in Bear" means. 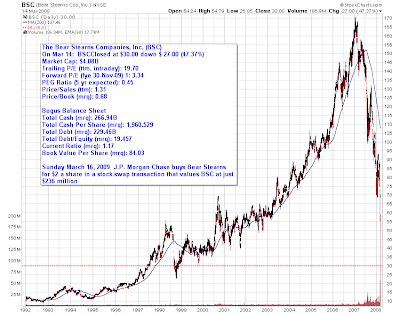 Anyone who was in Bear Stearns the stock last Tuesday and held it on what Cramer said is not going to be a happy camper today.

This graph of the rise and fall of Bear Stearns stock is one for my historical files. Let it be a reminder to not put all your eggs in one basket, even if you work at the company and the company pays you in company stock. Take profits and diversify!

Posted by Kirk Lindstrom at 1:38 PM