How Many Barrels of Oil Will One Ounce of Gold Buy?

Crude Oil Price in Gold: This chart shows the price of oil ($WTIC), the price of gold ($GOLD) and the number of barrels of oil one ounce of gold would buy for dates between January 1990 through today. 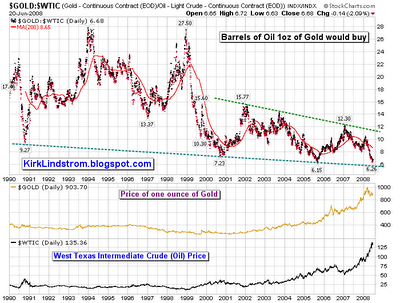 Currently, one ounce of gold will get you 6.68 barrels of oil.

I think the chart makes it quite clear why Saudi Arabia and some others think oil is too high.

It is interesting that during President Bush's term (following Bill Clinton) one ounce of gold bought between 6 and 16 barrels of oil with the lowest number of barrels per ounce in 2005 at 6.15. At today's record high prices for oil, we get slightly more barrels of oil (6.26 vs 6.15) for an ounce of gold!

Also of note is the 19 year support line indicates we are near an extreme level again.

Here is the same chart with the US Dollar ($USD) index added. 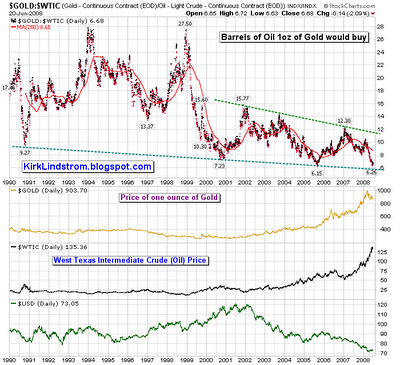 If the dollar has bottomed and we can make it go up again, perhaps with an energy program that does not send trillions of dollars to OPEC and higher Fed Funds rates, then US consumers could get some relief at the gas pump.

To find out how I've profited greatly from these difficult market conditions over the past decade, subscribe to "Kirk Lindstrom's Investment Newsletter" today!

Posted by Kirk Lindstrom at 2:49 PM