Bubbles: Nasdaq vs. Homebuilders vs. Oil?

Somebody posted this chart with no attribution in a forum I read. It compares the price percent change over time for the NASDAQ, homebuilders and Oil. We know with 20:20 hindsight that the Nasdaq and homebuilder stocks were in a bubble that popped with a huge bang. Will oil suffer the same fate allowing soccer moms to shuttle their kids to and from school in big SUVs again? I think not but I better on oil continuing to go higher and higher is a dangerous game. 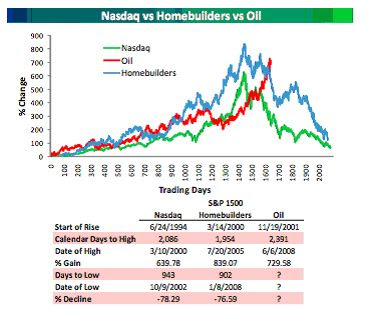 The chart probably goes with the following article that I've excerpted below:

When will the bubble burst ... or will it.
Isaac Newton On Oil...
by Alexander Green, Chairman, Investment U
Investment Director, The Oxford Club

Nearly two months ago I wrote a column asking "Is Oil Becoming the 'Mother of All Bubbles.'"

Personally, I don't think it is. Even though oil has since hit several new records, some bubbles are just hard to beat.

In 1623, according to Charles Mackay, author of "Extraordinary Popular Delusions and the Madness of Crowds," a single tulip bulb changed hands for a thousand Dutch florins. (The average annual income in Amsterdam was 150 florins at the time.) Within a few years, tulip bulbs were traded on numerous Dutch exchanges. Some traders even sold tulip bulbs they had just planted or those they only intended to plant. (Tulip futures contracts, in other words.)

We all know how the famous Dutch tulip bulb mania ended. Fortunes were lost. Thousands of Dutchmen ended up financially ruined.

In 1720, an English firm - the South Sea Company - was granted a monopoly to trade with South America under a treaty with Spain. The primary product? West Africans sold into slavery. This seemed like such a good deal - even though the company made little actual profit - that shares rose more than ten-fold in a single year.

When Sir Isaac Newton was asked how high South Sea stock might eventually go, he replied, "I can calculate the motion of heavenly bodies, but not the madness of people."

Good answer. The stock soon collapsed and thousands of investors were wiped out.

With these classic bubbles in mind, let's take a dispassionate look at today's oil market.

There is a disconnect when supply goes up, demand goes down and prices continue higher. This often happens in the late stages of a bubble where higher prices are what cause higher prices as people find ways to fool themselves into jumping in just before a crash.

Oil demand in the United States is actually down 2% so far this year. According to the federal Energy Information Administration, high prices and a weak economy will knock down U.S. oil consumption by 90,000 barrels a day in 2008.

The situation is similar in other parts of the world. The International Energy Agency (IEA), the Paris-based energy watchdog of the world's richest nations, recently lowered its forecast for world oil demand growth by 460,000 barrels a day. The IEA also sees supply from outside OPEC growing by 815,000 barrels a day, the strongest growth since 2004. (And this was before Saudi Arabia's recent promise to boost production by a million barrels a day.) 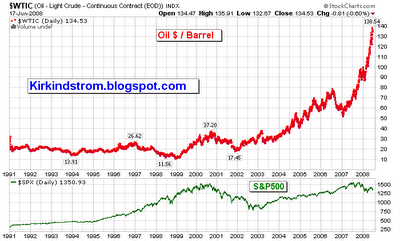 Some will argue that this price rise is fully justified. After all, most of the world's major oil deposits have already been discovered. The low-hanging fruit has been picked. The remaining oil supplies are tough to get at - and expensive to recover.

Meanwhile, the world's demand for oil keeps rising as more people around the globe - especially in emerging giants like India and China - pound the table for "more juice."

This story is essentially correct. But it is just a story - and a thoroughly well-known one at that. It is not a rationale to buy oil today.

Especially since high prices always sow the seeds of their own collapse. Consumers start to conserve. Producers search for oil that was once too costly to extract. Supply and demand come back into balance.

According to Stephen Schork, President of Schork Group, a firm that advises the Organization of Petroleum Exporting Countries, "There's nothing different between this mania, the dot-com mania, the real estate mania, the Dow Jones mania of the 1920s, the South Sea bubble and the Dutch tulip-bulb mania. History repeats itself over and over and over again."

This is probably the reason OPEC is not spending large sums of money to increase supply. They are much better off to get all they can for their oil before the bubble crashes. Why spend a fortune to increase capacity that comes on line as soon as the US switches to hybrid or plug-in electric cars charged by nuclear power plants at night.

Yes, speculative fever has gripped the oil market. This bull is likely to end up just like those in the ring in Mexico City. Current oil prices are simply unsustainable.

That doesn't mean that oil is going to plunge today or tomorrow. Indeed, it could keep rising for quite some time. After all, you cannot make a rational judgment about when irrational behavior will end.

But oil prices will come back down. And that will be positive for both the economy and the stock market.

If you have big profits in your energy stocks, consider paring back. Or at least running your trailing stops closer to better protect your profits

Of course, history never repeats itself exactly the same way. We may not be at the exact inflection point.

But ask yourself this: If Isaac Newton were around, would he be buying oil today?

Think about that. And govern yourself accordingly.

Here is a link to Investment U for more of their work
Posted by Kirk Lindstrom at 8:31 PM