Billionaire oilman T. Boone Pickens was on CNBC today. Here is a synopsis of his comments about oil (charts) and Yahoo (YHOO). Boone said demand for oil is being killed in the US and Europe so the price of oil has come down. 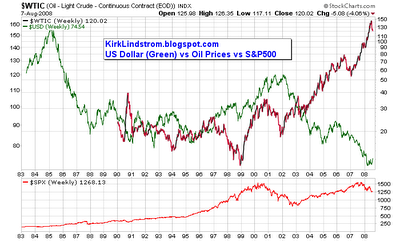 Joe Kernan asked Pickens "you paid for the Swift Boat ads and now the left is using your 'we can't drill our way out of this' statement. How do you feel about that?" Boone said.

Pickens On the price of oil:

In a past appearance, he said he was short oil at about $100 and I believe he said in another appearance he covered that short around $108 for a loss. Pickens may believe $85 was the high end of oil's trading range without a speculative bubble. This would agree with another noted oil analyst Charlie Maxwell's belief that oil would trade between $50 and $80 and hit $85 by 2010 (see "Charlie Maxwell Interview by Bob Brinker - Sept. 2007").

On Yahoo!:
Pickens wants to work as a general for either McCain or Obama so he can be nonpartisan in helping with the oil crisis. After attending several town hall meetings, Pickens says people in America don't believe they are being told the truth about energy in America.

Pickens said he will be back as a guest in about a month.


Subscribe NOW and get the August 2008 Issue of "Kirk's Investment Newsletter" for FREE! ! (more information)

Posted by Kirk Lindstrom at 5:58 AM