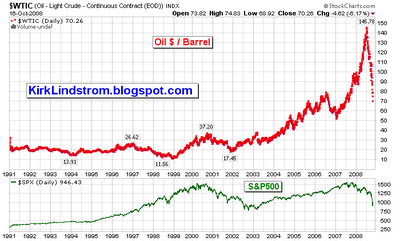 Click chart courtesy of stockcharts.com for full size image
This chart from "Chart of the Day" puts the decline in perspective. When adjusted for inflation, oil prices are now lower than they were during the Iran crisis and just after Hurrican Katrina spikes.

Some on TV say the spike in the price of oil was driven by speculators, but this chart shows the weak dollar was also responsible. 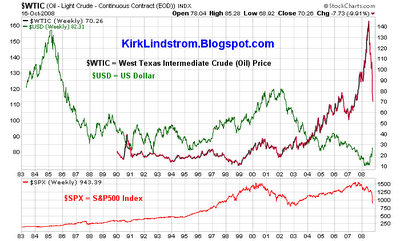 Now that the global stock markets have melted down, investors around the World are seeking safe haven in short term US Treasury notes which is helping the dollar rally.

It appears the weak dollar pushed oil prices to the low $100s. Then trend followers and clueless speculators pushed it higher, which is normal in a free market.

Now that the speculators have fled and the dollar is stronger, the price of oil has fallen to just below the low end of the range expected by well known oil industry analyst Charlie Maxwell. See:
.
Posted by Kirk Lindstrom at 6:44 AM