GeoGlobal's stock (GGR charts) more than doubled in the past week. Now we know one reason why. GeoGlobal's partner, the Gujarat State Petroleum Corporation (GSPC), struck oil in its onshore Ankleshwar well number 21 at a depth of 2,200 meters. Several sources say the well is yielding 200 barrels a day. 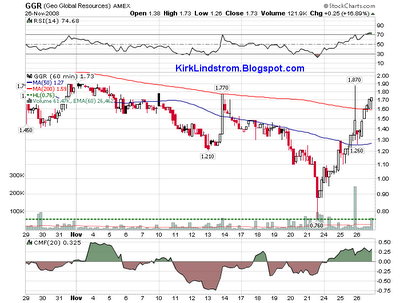 As at November 17, 2008, five exploratory wells have been or are being drilled on this block.

The Ank-1 and Ank-8 wells were drilled to total depths of approximately 2,600 and 2,100 meters respectively. Both wells have been tested and are currently suspended awaiting further evaluation.

The Ank-10 and Ank-21 well have been drilled to a total depth of approximately 1,400 and 2,200 meters, respectively. The Ank-10 has been tested and is awaiting further evaluation, while the Ank-21 is currently being tested.

GeoGlobal has a 10% interest in this Ankleshwar blockThe other partners are:
More information
Disclaimer #1: I am on "house money" with GGR. I purchased GGR for my newsletter explore portfolio between $0.94 and 2.25 in 2004 and I have shares purchased as low as 12¢ in my personal portfolio. I took a TON of profits when the stock was high, including twice in the $13s in late 2005, so I have huge profits in this already which may allow me to trade this more aggressively.

Disclaimer #2: I added 2,000 shares to my newsletter "explore" portfolio last week at $1.30 when it reached my "Auto Buy" target, a limit order set ahead of time at our brokers. As luck would have it, I got 1,000 shares put into my ROTH at $1.24 via my limit order as someone was in a huge hurry to sell into the panic last week where my net was out to catch some shares.

Posted by Kirk Lindstrom at 8:08 AM

Email ThisBlogThis!Share to TwitterShare to FacebookShare to Pinterest
Labels: GGR