The USFIG declined to 85.5 (1992=100) in December from 86.7 in November, though its smoothed annualized growth rate (charted below) ticked up to -36.5% from -37.7%. The gauge was pulled down in December by disinflationary moves in measures of commodity prices, vendor performance, unemployment and job growth, partly offset by inflationary moves in measures of loans and interest rates. A spokesperson for ECRI said:

"It is notable that the USFIG was in a clear cyclical downswing in mid-2008, when financial markets and monetary policy makers alike were mistakenly concerned about the threat of inflation. With the USFIG now sliding to a half-century low, U.S. inflation pressures are in full retreat." 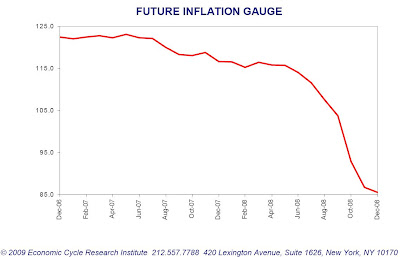 The Fed Funds target rate is currently a range between zero and 0.25%.
More Information:
Post your Comments Here

Posted by Kirk Lindstrom at 6:40 AM