The USFIG declined to 81.8 (1992=100) in January from 84.5 in December, while its smoothed annualized growth rate (charted below) slipped to -38.8% from -37.9%. The gauge was pulled down in January mainly by negative contributions from measures of loans, vendor performance, unemployment and job growth, partly offset by a positive contribution from a measure of commodity prices.

"With the USFIG locked in a clear cyclical downswing, U.S. inflation pressures areessentially non-existent. Rather, there are continued downward pressures on U.S. consumer prices." 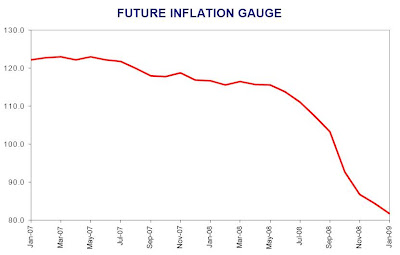 The Fed Funds target rate is currently a range between zero and 0.25%.
More Information:
Post your Comments Here

Posted by Kirk Lindstrom at 8:02 AM