Dec. 14 Headline: Citi to raise $17 billion to repay U.S.
Excerpts:
Dec. 3 Headline: BofA sells $19.3 billion of securities for TARP repay
Excerpts:
According to a document released today by Citi titled "Repaying TARP and other Capital Actions," Citi's Tier 1 capital ratio (a measure of a bank strength) will drop to a tie with #2 BofA while its Tier 1 common ratio will remain the leader at 9.0% compared to 8.4% at #2 BofA. 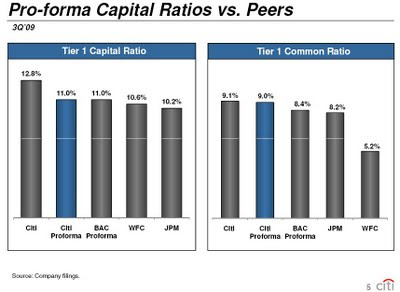 Today BofA and Citi are trading at $15.53 and $3.74, respectively. Current:
Disclosure: I own Citi in my personal account and have a profitable position in my "explore portfolio" with the last trade a buy at $2.95.

Posted by Kirk Lindstrom at 8:09 AM