Paulson Says Sell Bonds then Buy Homes and Stocks because double digit inflation is on the way.
John Paulson, the multibillionaire hedge fund operator who correctly called and profited from the collapse of the real estate bubble by shorting subprime mortgage debt, expects double digit inflation by 2012.  His advice is to sell bonds and buy stocks, gold (Gold Quote and Charts) and real estate.  Reports from all over the net including Forbes include these excerpts:
Paulson has his money where his mouth is.  As of the end of Q2, he was the largest institutional holder of the Gold ETF GLD with a total position greater than the sum of the next three positions ( two through four.)
SPDR Gold Trust (GLD Charts and Current Quote)
Gold has soared in the past two months to new all time highs. 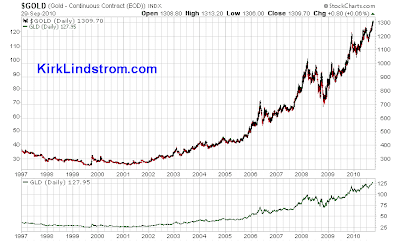