I read a hear a lot of nonsense that only "Wall Street" benefits from low interest rates while "Main Street" suffers. This is not true.
The Fed hopes they can cause real estate prices to recover so property taxes go up giving states and municipalities more money. The trouble is, even with artificially low interest rates, many municipalities are still in trouble.

Mounting pension liabilities have cost Chicago another cut in its credit standing as Moody’s Investors Service reduced the general-obligation debt rating for the nation’s third-largest city by three steps to A3, citing a $36 billion retirement-fund deficit and “unrelenting public safety demands” on the budget.

Moody’s also placed the city’s $7.7 billion in general-obligation bonds under a negative outlook, indicating another cut may be made. The moves follow a review that began in April, when the New York-based rating company said it was reevaluating the credit effects of municipal retirement obligations.

Detroit may file for bankruptcy within days if emergency manager Kevyn Orr can not reach agreement with the city's bondholders, pension funds and other debtees over restructuring $20B of long-term liabilities. The plan is to offer secured creditors much of what they're owed but to provide pennies on the dollar to unsecured bondholders, unions and pension funds. Municipal-worker retirees would be especially hard hit, receiving less than 10% of what they're owed.


Two Detroit pension funds sued the city’s emergency manager and the governor of Michigan, asking that a court find a bankruptcy filing would conflict with the state’s constitutional protection of public retirees’ rights.

The General Retirement System and the Police and Fire Retirement System of the City of Detroit filed the lawsuit yesterday in state court in Ingham County, Michigan, seeking a judgment that Governor Rick Snyder can’t authorize a bankruptcy filing that could reduce pension benefits

Long Term Results that Speak for Themselves 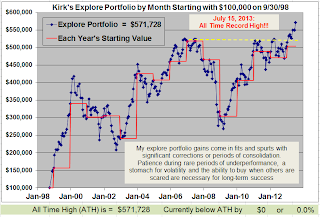 Posted by Kirk Lindstrom at 7:34 AM