Subscribe to my Newsletter NOW &
get the December 2016 Issue for FREE!!
This chart shows KEYS is up 29.26% YTD with a bull flag pattern stretching from mid November through today. 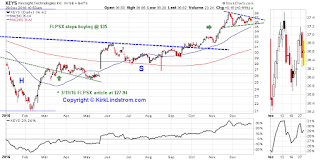 This next chart shows KEYS has an "Inverted Head & Shoulder" pattern stretching from May 2015 through mid September 2016.  The break of this dashed blue neckline was bullishly tested from above in October 2016 before the big jump to $38 in November 2016.

Here is a great "Pro" article at Seeking Alpha "Keysight Technologies: An Intriguing Bull Case, But It Looks Priced In"  that basically says "Keys was a great buy when Kirk was buying in the $20s and low $30s but not so great now after he took profits!" 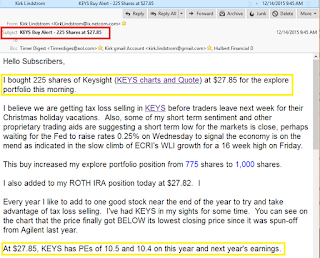 I believe one reason we are seeing a major "pause" here is Fidelity's Joel Tillinghast said in March that he would stop buying it for his stellar $35B "Fidelity Low-Priced Stock fund" at $35 so he's probably done what I did and take some profits. See Barrons "Fidelity’s Tillinghast: How He Beats the Market"


"Keysight can improve its profitability as a stand-alone company and might possibly be an interesting acquisition. Oftentimes, the second part of the story to spinoffs is that they get reacquired. It might be, by another instrument company. Keysight trades at $26 and is earning not quite $3. On a quarter-to-quarter basis, growth looks a little volatile, but less so on a yearly basis."

I was fairly aggressive buying KEYS for my "Explore Portfolio" in the low $30s and $20s and have already taken some profits with a break-even price now down to $26.47.

Subscribe to my Newsletter NOW
and get the December 2016 Issue for FREE!! 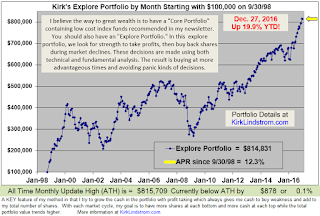 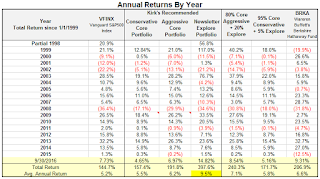 Posted by Kirk Lindstrom at 8:10 AM