Not stating earnings until they sort out the option backdating issues was not news. The news was they missed analysts’ expectations for earnings by $1.6M or 1.5%, which is pretty much noise. On the news, Finisar fell 24% from $3.78 to $2.87 in two days.

I believe James Altucher and Ruthie Ackerman have it right. Opportunity knocks. 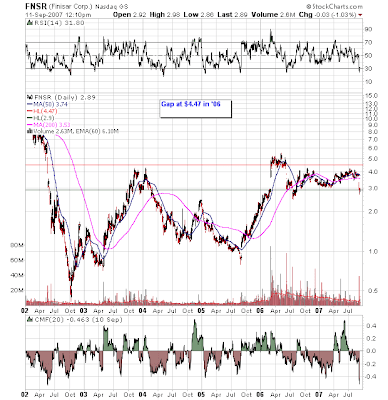 Disclaimer. I accumulated Finisar in my Newsletter Portfolio between $1.01 and $1.99 and still hold it today in both my newsletter and personal accounts. I may buy or sell at any time and will probably not announce it here. Of course, I have "auto sell" levels in the newsletter to take more profits and any additional buys or sells in the newsletter portfolio will be announced to subscribers via email when made.

Posted by Kirk Lindstrom at 8:54 AM