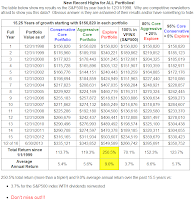 Posted by Kirk Lindstrom at 2:32 PM No comments:

Highlights of the Fiscal Cliff Deal

The big "good news" for me is this makes the tax rates PERMANENT so we can plan for the future. The big "bad news" for me is this deal is a "joke" in that it kicks the can down the road where the can is unsustainable budget deficits to fund out of control government spending.  See my article "SPY Soars As U.S. Borrowed 51.6¢ Of Every Dollar Spent In November 2012."

— The Alternative Minimum Tax would be permanently patched;

— Estates over $5 million would be taxed at 40 percent, and that tax rate would be permanently extended

—The payroll tax cut is allowed to lapse, so the employee portion of the Social Security tax will return to 6.2% from 4.2%.

—The Act also extends some farm support schemes for a year to avert the "dairy cliff" that many feared would double the price of milk.

By making the Bush/Obama tax cuts permanent, the "deal" actually adds about $4 trillion to the deficit over the next decade.

The hope is to raise $600B in new revenue over 10 years. All in all, overall taxes will increase for over 75% of households in 2013, says the Tax Policy Center.

President Obama thanked lawmakers from both parties for their votes, saying it allows him to "sign a law that raises taxes on the wealthiest 2 percent of Americans while preventing tax hikes that could have sent the economy back into recession."

What we really need is fundamental changes that cap deductions at some "reasonable amount." By reasonable, I suggest not letting Mitt Romney buy his way into heaven with a taxpayer funded donation to his Mormon Church. Why should we fund that with a tax deduction? Likewise, I don't see why people living in low cost housing areas should subsidize my mortgage or the super high taxes we pay in Taxifornia or New York with deductions for these on federal taxes. I'd love to see the top rate lowered but then limit total deductions to some "reasonable" number like $50K a year which is high enough for most but it captures the excessive deductions of the very wealthy.