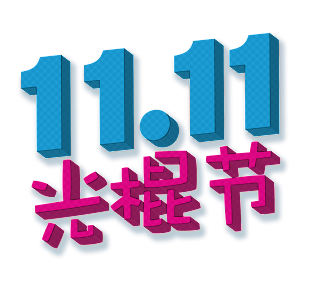 From Singles Day (Wikipedia)
It is fascinating how Alibaba (BABA) turned this into the largest shopping day in the world using its clout and the large imbalance of single men in China largely due to their "One-child policy." 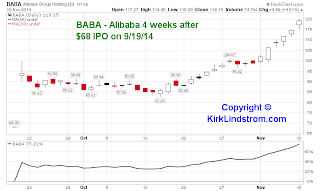 From One-child policy (Wikipedia)
I think Jack Ma, CEO of Alibaba, showed he may be the world's top capitalist by getting a trademark on the "double eleven" term in China then turning it into the largest day for online shopping in the year. 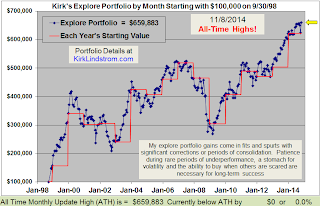 
Subscribe NOW and get the November 2014 Issue for FREE!
More Info, Returns & Timer Digest Cover Article
Posted by Kirk Lindstrom at 6:33 AM No comments:

Email ThisBlogThis!Share to TwitterShare to FacebookShare to Pinterest
Labels: BABA

The Bureau of the Public Debt today announced earnings rates for Series I Savings Bonds and Series EE Savings Bonds, issued from November 3, 2014 through April 30, 2015.

I bond fixed rates are determined each May 1 and November 1. Each fixed rate applies to all I-bonds issued in the six months following the rate determination.

The Current I Bond Composite Earnings Rate is 1.48%

For more about how I Bond Rates are calculated, see

===================
The new rates for your older Series I bonds are at:
Disclaimer: I own Series I Bonds in my personal account and currently have them in my Newsletter Explore Portfolio.
Posted by Kirk Lindstrom at 3:35 PM No comments: