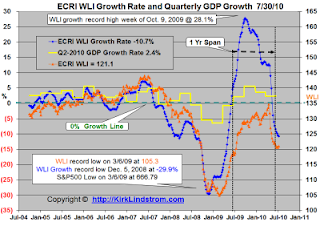 Click to view full size chart
The stock market should finish this week up.  Post your guesses for WLI and WLI growth for next week in the comments section plus your reason why.  (example, WLI up + WLI growth up.  Reason, Bernanke dropped dollars from a helicopter this week.)

Disclosure:  I am long SPY (charts & quote) in my personal account and in the "Explore Portfolio" in  "Kirk Lindstrom's Investment Letter."

Posted by Kirk Lindstrom at 7:30 AM 3 comments:

Despite the "Death Cross" in the S&P500, as of today we have heard of no change in ECRI's economic outlook of  a slowdown without a double dip recession as we reported at ECRI Weekly Leading Indicators Widely Misunderstood.

Click chart for full size image
The Economic Cycle Research Institute, ECRI - a New York-based independent forecasting group, released their latest readings for their proprietary Weekly Leading Index (WLI) this morning. (More about ECRI)
For the week ending July 16, 2010
This is a chart of the S&P500 (charts + Quote) vs ECRI's WLI from October 1, 2004 through July 23, 2010. 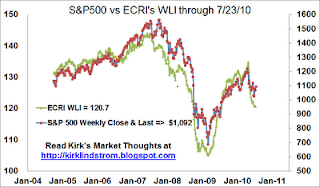 Click chart for full size image
Which way do you think the Market and WLI will go? With the stock market up this week, the odds are good that WLI will be higher next Friday. 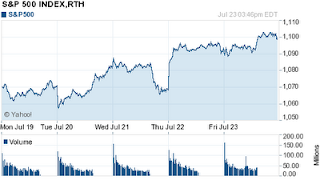 Click chart for full size image
Make sure you read:
Disclosure:  I am long SPY (charts & quote) in my personal account and in the "Explore Portfolio" in  "Kirk Lindstrom's Investment Letter."

ECRI's WLI Flat While its Growth Rate Falls
The Economic Cycle Research Institute, ECRI - a New York-based independent forecasting group, released their latest readings for their proprietary Weekly Leading Index (WLI) this morning. (More about ECRI)
For the week ending July 16, 2010
This is a chart of the S&P500 (charts + Quote) vs ECRI's WLI from October 1, 2004 through July 23, 2010. 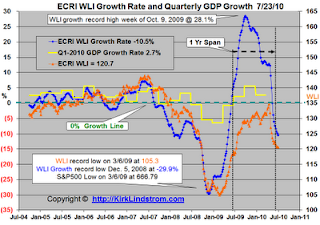 Disclosure:  I am long SPY (charts & quote) in my personal account and in the "Explore Portfolio" in  "Kirk Lindstrom's Investment Letter." 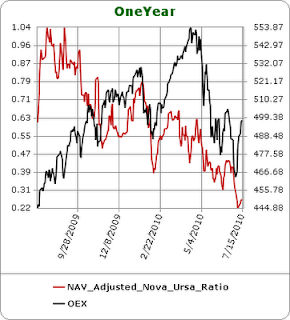 Posted by Kirk Lindstrom at 6:40 AM No comments:

The top CD annal percentage yield (APY) this week is at Pentagon Federal Credit Union for a 7-year certificate of deposit currently paying 3.51%.   From my survey of six months ago, this same certificate was paying 4.5%!

The table below shows the best CD rates for other terms. If that table is hard to read, then try Very Best CD Rates.
"Highest CD Rate Survey + Current US Treasury Rates"
Vanguard Money Market Rates shown for Reference


With rates so low, banks will try to sell you their annuity products. Make sure you read my article: Beware of Annuities

Related information:
Posted by Kirk Lindstrom at 10:12 AM No comments:

click for full sized chart
July 2, 2010 Data
This "death cross" for the S&P500, last occurred between the 50- and 200-day moving averages in December 2007, shortly after the beginning of the market decline that eventually took the S&P 500 to 12-year lows in March 2009.
One of the simplest trend following models says BUY when the S&P500 makes a "golden cross" where the 50 DMA crosses above its 200 DMA then SELL when the "death cross" occurs.    This model worked well the last time there was a death cross.

WARNING: Not all death crosses signal a new bear market and some occurred after the bottom was made. Another problem with this sort of "system" is markets that are range bound can give many signals so you end up selling low and buying high over and over.

For example, the death cross system missed the 1987 bear market, went to cash near the lows but after the bottom in 1987, got back in at a higher level in mid 1988 then lost more ground to "buy and hold" through whip-saw action between 1990 and 1991.

More:
Posted by Kirk Lindstrom at 6:54 AM No comments:

Article by ECRI's Lakshman Achuthan and Anirvan Banerji. ECRI is an independent institute dedicated to economic cycle research in the tradition established by its founder, Geoffrey H. Moore, whom The Wall Street Journal called "the father of leading indicators." Read "More about ECRI."

There’s been much attention to our work of late, culminating in a report this Tuesday from Bank of America listing several critiques of our Weekly Leading Index (WLI). Apparently, the clinching argument is that “If a single indicator always accurately predicted the trajectory of the economy, the demand for Wall Street economists would be significantly reduced.”

To some Wall Street economists, it may seem self-evident that there should be strong demand for their views. But this is not at all clear to us as far as their recession-forecasting function is concerned. After all, a 63-country IMF study on economists’ recession-forecasting prowess concluded that “The record of failure to predict recessions is virtually unblemished.” In contrast, the IMF subsequently noted that ECRI “has actually had a very stellar record” of recession forecasting.

As we outlined in our 2004 book, Beating the Business Cycle, there is no Holy Grail of economic forecasting, even among our large array of state-of-the-art leading indexes, of which the WLI is but one. It seems that many of the self-styled experts on the WLI either haven’t read the book, or simply don’t understand the parts of the book where we repeatedly state, in no uncertain terms, that ECRI does not use models. 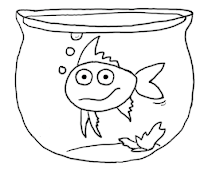 We aren’t entirely surprised. Virtually the entire analytical community has been trained to believe that any and all quantitative approaches to forecasting must involve models, i.e., simplified representations of reality. The idea that there could be rigorous quantitative approaches that are not model-based seems to be entirely beyond their ken. Their understanding of analytical techniques is so model-soaked that it reminds us of an insightful comment from psychologist Daryl Bem: “It takes a very intelligent and non-parochial fish to realize that his environment is wet.”
So it is with economists who cannot imagine that ECRI’s leading indexes are not model-driven or based on back-fitting of data. Thus the BofA report notes that “the ECRI (sic) and other leading indexes . . . fit the business cycle better ex post than ex ante” and that “This is an example of a broader issue in all statistical models of the economy. The data fit much better in-sample than out-of-sample.”
They just don’t get it. While this may be a valid criticism of statistical models of the economy, ECRI’s leading indexes are not, in any sense, statistical models of the economy.
BofA’s ignorance of the facts continues in their use of a 1993 (yes, 1993!) Dallas Fed study of the Commerce Department’s LEI to impugn the WLI. The Fed paper correctly points out that the-then LEI got revised a lot — a situation that hasn’t changed now that the Conference Board maintains the index. However, none of what the Fed reviewed in 1993 had anything to do with the WLI, which is the target of the current BofA report.
Furthermore (not that we’re fans of the Conference Board’s LEI) but the Dallas Fed study may not be valid in the first place, since the results are based on a Bayesian model chosen by the Dallas Fed to generate recession and recovery signals from the LEI. In other words, it isn’t clear whether failures highlighted in that report have to do with the LEI itself or the assumptions and the specifications of the Bayesian model used in that study.
Still, the BofA’s latest forecast of a “recovery, stronger than what we saw in the early 2000s and 1990s, but weaker than V-shaped recovery in the early 1980s” is very much in line with what ECRI predicted — in August 2009. At that time, we said the recovery would be “at a stronger pace than any the United States has seen since the early 1980s.”
BofA’s parroting of our forecast from late last summer reminds us of Jon Stewart’s segment on Nowcasting where experts describe something that’s already happening as though it’s coming (Jason Jones starts at three-minute mark).
Bottom line, neither the “experts” predicting that the sky is falling based on the WLI, nor the other “experts” indulging in misinformed WLI-bashing in an effort to discredit the super-bears, have a real clue to what the WLI is all about. We created the WLI not to be an infallible, stand-alone recession-forecasting machine, but as one small part of a much larger array of leading indexes (each made up of many economic indicators) — like the especially prescient U.S. Long Leading Index. This array amounts to a sophisticated sequential signaling system of the economy’s cyclical turning points. The WLI is designed to be interpreted in this broader context, and its message today is quite simple: A slowdown in U.S. economic growth is imminent, but a new recession is not.

DOW Stocks YTD at end of First Half 2010

The following table ranks the performance of the 30 DOW stocks from best to worst.

Note, Price Performance does not include dividends.