GoDaddy Websites Are Down

I was helping someone debug their computer network this morning. While testing, I found some of my web sites (for example: KirkLindstrom.com) hosted by GoDaddy.com  worked and some did not.    My web pages hosted on other sites worked just fine.

I tried their web site and even sent a support message.  Their own home page said there were no issues...  Yet I've learned they tweeted they had issues several hours before I checked! 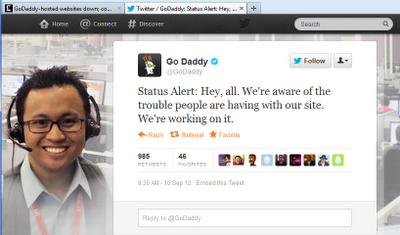 It is really tough to debug a network problem when the internet itself is having issues.  What a waste of time running around trying to fix things that were not my problem and I've paid good money for reliability!!!

Email ThisBlogThis!Share to TwitterShare to FacebookShare to Pinterest
Labels: News 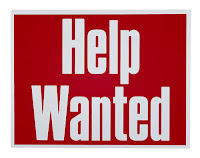 Today the U.S. Bureau of Labor Statistics reported job creation was weak and the unemployment rate remains high.  The number of jobs created was well below the 150,000 estimated new jobs needed to keep up with population growth.  Currently the unemployment rate in the US is 8.1% and only 96,000 new non-farm jobs were created by the economy in August according to the U.S. Bureau of Labor Statistics.  Yesterday ADP, a private company, estimated private sector employment grew by 201,000. Below is a summary of the official data from both releases.

Friday September 7, 2012:  Total nonfarm payroll employment rose by 96,000 in August, and the unemployment rate edged down to 8.1 percent, the U.S. Bureau of Labor Statistics reported today. Employment increased in food services and drinking places, in professional and technical services, and in health care.

The unemployment rate edged down in August to 8.1 percent. Since the beginning of this year, the rate has held in a narrow range of 8.1 to 8.3 percent. The number of unemployed persons, at 12.5 million, was little changed in August. (See table A-1.)

In August, the number of long-term unemployed (those jobless for 27 weeks or more) was little changed at 5.0 million. These individuals accounted for 40.0 percent of the unemployed. (See table A-12.)

Both the civilian labor force (154.6 million) and the labor force participation rate (63.5 percent) declined in August. The employment-population ratio, at 58.3 percent, was little changed. (See table A-1.)

In August, 2.6 million persons were marginally attached to the labor force, essentially unchanged from a year earlier. (These data are not seasonally adjusted.)

These individuals were not in the labor force, wanted and were available for work, and had looked for a job sometime in the prior 12 months. They were not counted as unemployed because they had not searched for work in the 4 weeks preceding the survey. (See table A-16.)

Among the marginally attached, there were 844,000 discouraged workers in August, a decline of 133,000 from a year earlier. (These data are not seasonally adjusted.) Discouraged workers are persons not currently looking for work because they believe no jobs are available for them. The remaining 1.7 million persons marginally attached to the labor force in August had not searched for work in the 4 weeks preceding the survey for reasons such as school attendance or family responsibilities. (See
table A-16.)

September 6, 2012 – Private-sector employment increased by 201,000 from July to August on a seasonally adjusted basis, according to the latest ADP National Employment Report® released today. The ADP National Employment Report, created by Automatic Data Processing, Inc. (ADP®), in partnership with Macroeconomic Advisers, LLC, is derived from actual payroll data and measures the change in total nonfarm private employment each month. The estimated gain from June to July was revised up from the initial estimate of 163,000 to 173,000.

According to today’s ADP National Employment Report, employment in the nonfarm private business sector rose 201,000 from July to August on a seasonally adjusted basis. Employment in the private, service-providing sector expanded 185,000 in August, up from 156,000 in July. Employment in the private, goods-producing sector added 16,000 jobs in August, while manufacturing employment rose 3,000, following an increase of 6,000 in July. Construction employment rose for the third consecutive month, adding 10,000 jobs, marking the best reading since March. The financial services sector added 8,000 jobs from July to August, marking the thirteenth consecutive monthly gain.

Carlos A. Rodriguez, president and chief executive officer of ADP, said: “According to this month’s ADP National Employment Report, the U.S. economy added 201,000 jobs in August, the largest increase in five months. The improvement in job creation this month is encouraging and we hope it continues across all sectors of the U.S. economy.”
Posted by Kirk Lindstrom at 7:19 AM No comments: