Today's front page of the San Jose Mercury News business section has a feature story on how OEMtek's $12,500 conversion using Valence (VLNC) batteries can improve the gas mileage of a Toyota Prius by double or more.

"There are people who want this right now, no matter what," said Cindi Choi, vice president of business development and the de facto chief executive of the six-employee company.

OEMtek will be ready to convert about 30 Priuses as soon as March, Choi said. It has battery packs on hand and continues to do durability testing and other late-stage engineering work. Its Web site (www.oemtek.com) has a "buy" link where customers can pre-order the vehicle.

and on the power plant:

Batteries come from Valence Technology, a Texas company (that I cover in "Kirk's Investment Newsletter") that says 80 companies have tested or used its batteries. Chairman Carl Berg is a Silicon Valley investor and real-estate developer. He's been doing test loops of the OEMtek cars from his Mission West Properties offices in Cupertino, averaging 89.81 mpg.

"We think this can be a very major business," Berg said of the OEMtek BREEZ. "We believe there can be 100,000 people or more easily that will buy this add-on to their Prius."

“BREEZ upgrades your regular hybrid car to a plug-in hybrid electric vehicle (PHEV) by adding a bigger battery pack & a standard electrical plug enabling you to get 100+MPG, reduce CO2 emissions by 50%, and costing you under $1.00 to fill-up.”

* BREEZ is a Plug-and-Play after-market solution that delivers an additional 9 kWh of energy storage using Valence Technology’s lithium phosphate batteries. (this is over 6x more energy than Toyota’s battery!)

It should not be long before somoene has a solar panel you can put on the roof of your "plug-in electric vehicle" (PEV) at work or while camping to charge the PEV off the grid. I may email the 6-person company and suggest that task for employee #7.

Images from OEMtek's booth at the 23rd International Electric Vehicle Symposium (EVS-23) on December 2-5, 2007 (Click on photo for more images) 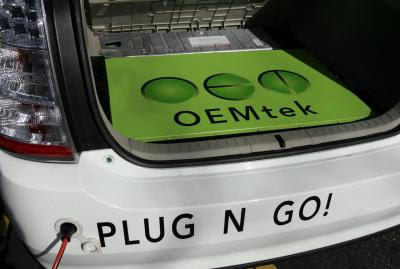 Disclaimer. I have been accumulating Valence in my newsletter and personal portfolios and have good profits already at Friday's closing price of $2.56. I plan to continue to trade around this core position in an attempt to increase my overall return. I expect Valence to be a very volatile stock

Posted by Kirk Lindstrom at 9:02 AM