Today in a brilliant piece of reporting, CNBC's Becky Quick (see Anchor Women of CNBC) interviewed Warren Buffett live in Omaha, Nebraska asking questions as if she were some famous people.

As Fed Chairman Ben Bernanke: “Did I go far enough or too far with the last cut?”

Warren Buffett Answered: “I don’t think they need more rate cuts” then “if they get rates down too low they have a real problem” and “I think I’d quit now.”

As US Treasury Secretary, Henry (Hank) Paulson: Excuse me Mr. Buffett, do you think the stimulus package is enough or do we need to come up with a second stimulus package?

Warren Buffett Answered: “I don’t think the stimulus is going to do an enormous amount of good. In fact, most people should pay down their credit cards when they get it.” Buffett went on about how dropping money on people can cause problems with future inflation. “Anybody that is paying 15 to 18% on their credit card is out of their mind to not pay it down with the money.” Buffett said they need to be careful about the consequences on inflation from using this tool.

As GOP presidential hopeful John McCain: “Is there anything I can do that would make you think twice” about supporting Obama or Clinton.

Buffett indicated he might reconsider if McCain decided the tax burden should be shifted away from the middle class and poor to the super rich. Buffett went on to say he ‘votes on the issues” but it was clear from his response he was not going to change from a life-long Democrat unless the Republican candidate had a lobotomy and joined his party.

As Microsoft (MSFT) Chairman Steve Ballmer, Quick asked if deciding to walk away from the Yahoo! (YHOO) deal was that the right negotiating tactic or thing to do. 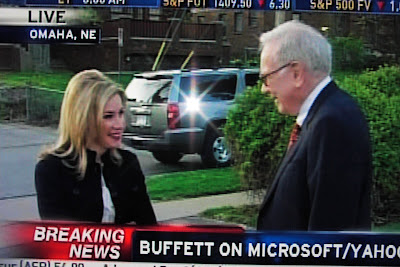 Warren Buffett Answered: “Well I don’t know if this is a negotiating tactic. I think he may have decided he may have gone as far as he can go. “Buffet went on to explain you have to have limits and know what they are for you when you go into a deal. Buffett said the shareholders of Yahoo! could come back to him in six months like Sees Candy did for him in 1972. Buffett said he means it when he walks away. He walked away from Sees when they wanted $30 million and he only wanted to pay $20 million. He walked away and fortunately they came after him.

Warren Buffett Answered: “The interest rates in Europe are significantly higher and he may be worried more about inflation. He compared US Fed Chairman Ben Bernanke to Scarlet O’Hare from “Gone with the wind” by saying “I’ll worry about inflation tomorrow.”

Becky asked if there was a chance the ECB is “behind the curve” just like the Fed was too slow to cut rates?

Warren Buffett said Trichet could be wrong but he probably has his own set of data that indicates inflation in Europe is a problem and he’s seen how hard it is to put out run-a-way inflation once it gets started.

As JP Morgan Chase CEO Jamie Dimon: “Do you think I made the right move to step in and buy Bear Sterns.

Warren Buffett said “socially” the Fed made the right move. If they had not stepped in that Sunday then the following week may have been something like Wall Street has never seen.

Quickie #1: Do you think the economy in the mid West is better off than other places?

Buffett A1: Yes because we didn’t have the housing bubble, there are jobs and our furniture business is booming.

Quickie #2: How much were Berkshire Shareholders spending at the annual meeting?

Buffett A2: They were buying 1.5 pairs of boots per minute and jewelry every nine seconds. Almost all the places selling goods at the annual meeting broke records and exceeded expectations.

Quickie #3: Is there a commodity bubble?

Buffett A3: I don’t know if it is a bubble but they moved up and there is a lot of inflationary pressure that has not got to wage pressure. When that happens then “the fun begins.”

Quickie #5: Comment on Barrons Cover speculating on who the next chief of Berkshire Hathaway.

Buffett A4: They don’t know but are having fun guessing.

Quickie #5: What about wind power? We hear you are investing in it in a big way.

Buffett A5: They are investing in wind all across Iowa like many other utilities.

Disclaimer: I own MSFT in my personal account and my “newsletter explore portfolio” with large gains. I may take profits should MSFT stock soar on the news Microsoft walked away from the Yahoo! deal.

Posted by Kirk Lindstrom at 5:23 AM