During the last bear market, the markets bottomed in October 2002 then rallied significantly before making a "higher low triple bottom" in March 2003. Fast forward to 2007 and 2008. After a 20.2% decline from the high to the low in the S&P500 on an intraday basis, we could be seeing the same thing now with this current correction after the recent return of the DJIA to above 13,000. (for more on this, see "Market Update for June 14, 2008 - Testing Support Levels" )

If this bottom is in, then I suspect semiconductor stocks (at least the ones in my explore portfolio) will continue to lead the markets on the way up to new highs just like they did in 1999 when my explore portfolio gained 117% and 2003 when it gained 77%. Semiconductor and technology stocks in general will do well in an environment of slow growth, higher than typical inflation and high energy prices. Why?
Switch to Digital TVs will drive the Next Semiconductor Cycle

People will also stay at home and spend on new HDTV sets rather than take long trips to watch NASCAR and other events. Regular TVs will not work without a special converter box after broadcasters switch to digital next year unless. I suspect the investment banks are accumulating the semiconductor related stocks I recommend now so they can "sell the story" next year just like they did in 1999 to “sell the Y2K new” where people bought new computers ahead of schedule to be ready for a possible “Y2K bug.” Like in 1999, I suspect the volume of new TV sets will soar as many will buy a new high definition TV set rather than use a converter box with their old TV.

Many of the stocks I have in the explore portfolio make or help make the components used in these new HDTVs and they are selling at very attractive valuations not seen since before the “internet bubble” began in 1996 characterized by Allan Greenspan calling the gains “irrational exuberance.” 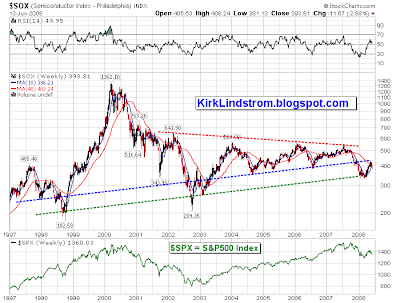 SOX Chart: Dips below the dashed blue line to the dashed green line have been exceptional buying opportunities for the Semiconductor Index ($SOX). I have taken some profits in my biggest gainer (UTEK) as we tested the dash blue line from below just before the recent market weakness.

I suspect some of my other favorite "trading stocks" in the newsletter (stocks like Agilent, Altera, AMAT,Intel, LRCX, MSFT , Verigy, etc.) will hit my targeted buy levels for further accumulation if the SOX tests the dash green line like it did in 2003 after making a low in October 2002. But I would not be surprised if the SOX soared without a retest like it did in 1998 just after I loaded up my explore portfolio with my favorite semiconductor stocks.

To find out how I've profited greatly from these difficult market conditions over the past decade, subscribe to "Kirk Lindstrom's Investment Newsletter" today!

Posted by Kirk Lindstrom at 7:53 AM