Charles (Charlie) Maxwell, Senior Energy Analyst at Weeden & Co., told Barrons he thinks $300 oil is "inevitable." With three or four new Saudi oil fields coming on line soon, Charlie thinks supply and demand are roughly in balance for the next two years. Charlie predicts oil prices between $75 and $115 for awhile. After that, he sees prices soaring again. 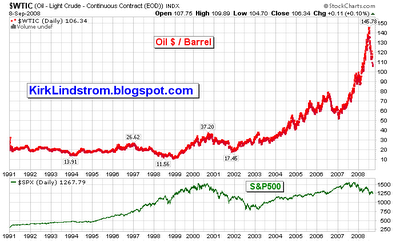 ==> Very Best CD Rates with FDIC <==
The above summarizes an article in the Monday September 8, 2008 Barrons (available today, Saturday September 6) titled "What $300-a-Barrel Oil Will Mean for You" By Lawrence C. Strauss.
Article Subtitle: "AN INTERVIEW WITH CHARLES MAXWELL: He correctly predicted the recent price spike -- and he sees an eventual move to around $300 a barrel."
Posted by Kirk Lindstrom at 6:06 AM