DOW Priced in Ounces of GOLD: A Secular Bear Market! 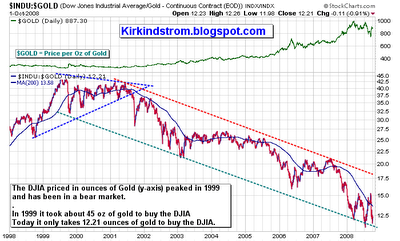 A chart of the DOW Jones Industrial Average (DJIA Charts) priced in gold shows the markets are not as healthy as one might think due to the decline of the US dollar.
The good news is the DOW priced in gold just bounced off support with gold falling faster than stocks. The news about the markets could not get much worse so perhaps we'll get lucky and have a triple bottom for the DOW:Gold chart and see the market rally in anticipation of better times in 2009.

Cutting the Fed Funds target rate from 6.50% in January 2001 to 1.0% in June 2003 may have inflated the US stock market out of its bear market when priced in dollars but it had consequences that we are feeling today.

CDs have been a "safe haven" for those wishing to preserve assets and get a small inflation adjusted return. See "Very Best CD Rates with FDIC" for a list of the best rates and terms. You can get 5% CDs with 12 and 13-month terms at Washington Mutual - WaMu (now owned by JP Morgan Chase) with an online CD . You can also get a one year CD paying 4.25% at Wachovia Bank (now owned by Citibank.)

Cutting interest rates to get the US out of the 2001 recession may have worked but the inflation in commodities and devaluation of the US dollar it caused has caused pain for the US consumer. This pain is often blamed on president Bush who took office just as the DOW/Gold ratio broke out of the "symmetrical triangle" pattern , shown above in blue and explained below.

More on "Symetrical Triangle" chart patterns: The Bible for technical analysis, Technical Analysis of Stock Trends, by Robert Edwards and John Magee, says about 75% of symmetrical triangles are continuation patterns and the rest mark reversals. This book makes a great Gift!

Posted by Kirk Lindstrom at 2:12 PM