Is the Recession In Its Second Year Now?

The people at "Chart of the Day" yesterday wrote:

Today, the US government reported that gross domestic product (total output of goods and services) contracted at an annualized rate of 0.3% in Q3 2008. The GDP report showed that consumer spending (about 70% of the US economy) declined 3.1% during the quarter which is the biggest decline since 1980. For some perspective on the US economy, today's chart illustrates the ECRI Coincident Index. This index is a composite of several economic indicators (includes measures of production, employment, income and sales) that provide an indication as to the current state of the US economy. Since 1950, the ECRI Coincident Index has (on average) peaked one month before the beginning of a recession (as measured by the NBER – the official arbiter of recessions) and troughed at the same time that a recession ended. Today's chart illustrates that the ECRI Coincident Index peaked back in September 2007. This suggests that the US economy has been in recession since Q4 2007 and that the recession is ongoing.

Courtesy of "Chart of the Day"
Based on data like new jobs, production, income and sales the US economy has been "recession like" for about a year. The chart below clearly shows the surge in GDP from the fiscal stimulus package ($300 to $600 tax rebate to taxpayers) attempted to push the economy out of a recession but it was too little, too late to keep GDP growth from going negative. See:
Economists now think Q4 2008 GDP growth will be between negative 5% and negative 0.1%. That would make for two consecutive quarters of negative GDP growth, the layman's definition of a recession. More importantly, it would give us negative GDP growth for three of the last five quarters that all showed a decline in jobs growth and plunging ECRI WLI. 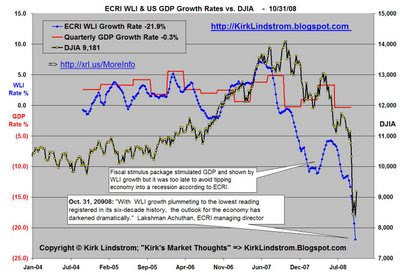 Lets hope the US Stock market rebound since its recent low is acting as a leading indicator . It may be predicting another stimulus package will come after the election and it could go even higher after the uncertainty over the election is gone next Wednesday and the efforts by the US Treasury and Federal Reserve restore liquidity to the credit markets.

Email ThisBlogThis!Share to TwitterShare to FacebookShare to Pinterest
Labels: Economy