Art Hogan is the managing director at Jefferies. On October 10, 2008 Art Hogan said

“I think if you look at all the carnage we’ve done to the major indices, the bottom gets put in today.“

Everyone who has money in the stock market was rooting for this to be true.

Sadly, yesterday we went much lower. 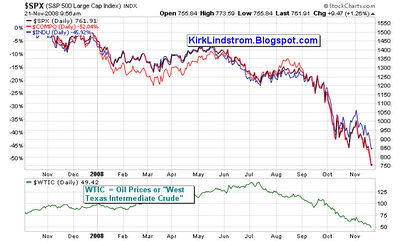 Below is a chart from "Chart of the Day" showing how this "correction" stacks up for all corrections between 1900 and today.

Click to View Larger Image
Chart of the Day says:

For some perspective on the current correction, today's chart illustrates all major stock market corrections (15% loss or greater) of the last 108 years.

Each dot represents a major correction as measured by the Dow. For example, the bear market that began in 1973 lasted 481 trading days and ended after the Dow declined 45%.

As it stands right now, the current stock market correction (October 2007 peak to most recent low which occurred today) would measure slightly below average in duration but above average in magnitude.

Posted by Kirk Lindstrom at 6:37 AM