Elaine Garzarelli, president of Garzarelli Capital, was correctly bearish for much of this bear market. Elaine was "Nightly Business Report's (NBR) "Friday Market Monitor" for Friday the 13th, 2009. You can read her full interview here. Elaine has a PhD in economics and she correctly forecast the 1987 bear market. She got bearish in the mid 1990s then recognized her mistake and got bullish again for much of the run up. I don't have any data for what she predicted between 2000 and 2008 and would welcome a full summary in the comments section or via email.
Elaine's last visit to NBR was Friday August 1, 2008. You can read the full transcript of her last visit here.

My comments on some of what Elaine said Friday February 13, 2008:

KANGAS: Because you have a Ph.D. in economics, Elaine, who could be better to ask as to whether these massive Obama rescue plans for the economy and the banks are going to work out.

GARZARELLI: Well, I think it's a little late. I think it's more of a 2010 deal than it is 2009. In both years it will be about 2 to 3 percent of GDP. But 38 percent of it is a tax cut and consumers right now, with the unemployment rate probably getting up to 10 percent, are more likely to save than to spend that money. And the other spending has to do with infrastructure projects. A lot of it goes to state and local governments and their budgets are so bad, they're likely to keep it rather than spend it.

KANGAS: On your last visit with us in early August, you were correctly bearish on the stock market mainly because you thought corporate earnings estimates from Wall Street analysts were far too high, about 42 percent too high. How about now?

GARZARELLI: Now they're 44 percent too high.

GARZARELLI: Because we had to lower our estimates again from 55 to 46 for the S&P 500 operating earnings. And that's because we see a peak to trough decline in real GDP of about 4 to 4 1/2 percent, which is the worst post-World War II recession that we have ever had.

KANGAS: Your 14 market indicators back in August were at the 50 mark. 30 is the sell signal, 65 a buy and so they were kind of bearish. Where do they stand now?

GARZARELLI: They're at 38 percent now and they need to go to 65 percent for a new cyclical bull market to begin. So they're still on a sell signal, still in a bear market. We might be getting near the end of it. It all depends really on credit spreads and how fast the BAA bond will come down. 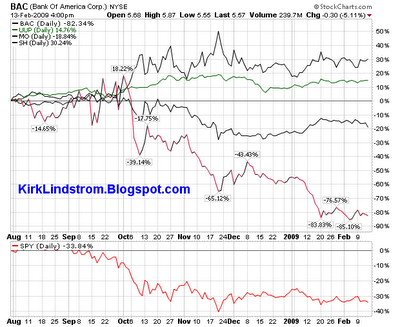 Lets see how she did with 25% Equal into each:

KANGAS: Do you have some new recommendations, Elaine?

GARZARELLI: Yes, I do. I have some good ones. Now, I think we might be in a trading range from 750 to maybe 950 on the S&P 500, so in that range you want to un-hedge at the bottom of the range and then you want to hedge at the top end of the range or you could keep hedges on all the time, which is what I do.

GARZARELLI: OK. The first one is (HNW) and that's 19 percent yield. And that is the--

GARZARELLI: That is the Pioneer high-yield income trust. Another one, municipal bonds I think are a great bargain right here. We're getting a 7.4 percent yield and that's MUA, Blackrock muni asset fund.

GARZARELLI: And I also like the dividend fund which is (RYU), that's the Ryder, the equal weighted utilities index where most of it is in utilities and then telecom about 20 percent. And then the last one is the same thing I did before but it's a double weight and that's (SDS), which is a short, which gets you 75 percent hedged, 25 percent exposure to the market. That should give you a dividend of about 12 percent.

Elaine says she owns them all.

I take it she is fully short at 950 then takes the shorts off as the market approaches 750 until her indicators give a buy signal.

Posted by Kirk Lindstrom at 8:04 AM