Average Gains in First Year of a Bull Market

With gains this week, we are officially in a new bull market. I hope you all did some buying near or at the bottom and are like me, looking for an opportunity to take profits. We won't know if this is another cyclical bull market in a long-term secular bear or the start of a new secular bull market until it ends. 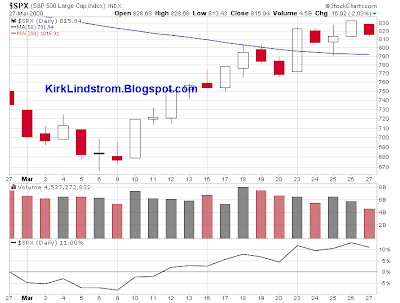 It does not really matter as I added to positions very close to the absolute bottom and plan to take profits as the market goes up. That will give me funds to buy any major "corrections" or bear market declines from the current level.
If this is a major new bull market, what sort of gains can we expect?

In the Fidelity article titled "How Will the Bear Market End? Historical patterns of stock market reversals" certified financial advisor Dirk Hofschire says the average gain in the first month of a new bull market is 12% of its entire gain. In the first year, we usually get 40% of the total price gain and 45% after counting for dividends.

What gains have we seen for this new bull market? 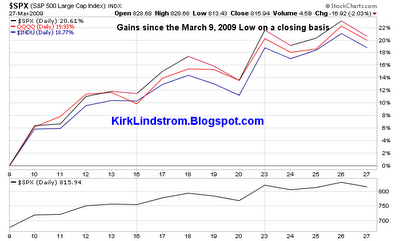 click chart courtesy of stockcharts.com for full size image
This chart above shows the S&P500 (charts) is already up 20.6% from its low on a closing basis. The DJIA and NASDAQ100 indexes are up 18.77% and 19.93%, respectively.

Posted by Kirk Lindstrom at 9:49 AM