This table, updated today, shows the best CD rates for the five largest banks operating in the United States. These banks are Bank of America, JP Morgan Chase, Citibank, Wells Fargo Bank, and HSBC Bank North America.
CD rates (APY) at the largest US banks (Current Data) for a $10,000 deposit.
To see the table in full size with the current rates, click the
Notes:
==> Best CD Rates with FDIC <==
A survey of large and small banks for best rates by term

One way to get four of the top five banks in a single investment is with the exchange traded fund XLF (XLF charts). 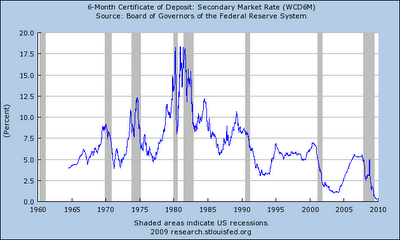 Disclaimer: I own C (charts) and XLF (charts) in my personal account. I also cover C and XLF in my investment letter where I trade them around a core position currently in the money for both. I could sell all shares at any time to lock in my profits if my opinion sours on the sector as a whole.
Posted by Kirk Lindstrom at 10:46 AM