Today the Bureau of Economic Analysis released its second estimate of US Gross Domestic Product or GDP for 2009 and Q4 of 2009. Unedited Press Release. The estimate for GDP was revised up by 0.2% from the first estimate for Q4-2009 GDP which was was 5.7%

See tables and graphs at the end of this article.

GDP for 2009 by Quarter and Full Year

Real gross domestic purchases -- purchases by U.S. residents of goods and services wherever produced -- increased 5.5 percent in the fourth quarter, compared with an increase of 3.0 percent in the third.

The above table breaking down the data by component is very interesting.
GDP Total and Percent 2000 to 2010 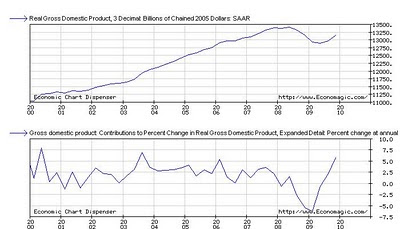 US Federal Debt as a percentage of GDP 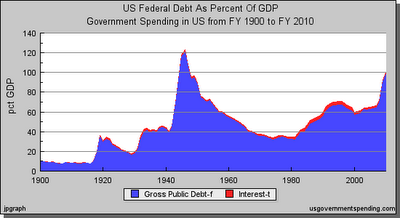 Posted by Kirk Lindstrom at 7:37 AM