Markets at Record Highs, Will They Continue Higher?

Can the market keep going up without a major correction?  Are we at a major top? Here are excerpts from what others are saying:


"Despite the tremendous momentum in the market, there is still sufficient buying power to keep the current trend alive. And just as the crowd sets its collective mind on potentially disappointing economic data (as they did ahead of earnings season), a small string of positive economic surprises amid lower expectations could be very supportive of stocks in the coming months."
- Monday Morning Outlook, May 4, 2013

"Stock ownership among Americans is at a record low. Just 52% of adults say that they or their spouse own any stocks, either individually or through funds. That's according to Gallup, which began tracking this in 1998."
- CNNMoney, May 9, 2013

"We can argue all day long about whether quantitative easing policies from the world's central banks are doing much to help the economy. But this much is for darn sure: It is boosting a wide range of financial markets ... So, why are some of the people who you would think would be the biggest beneficiaries of this strategy so angry about it? That was the consistent tone among titans of the hedge fund industry at the Sohn Investment Conference conference [sic] Wednesday ... Zero interest rates from the Fed haven't sparked inflation; interest rates have fallen despite huge government deficits; and the stock market has risen steadily in the face of a still-weak economy ... it may just be more convenient to blame the (bearded) man behind the curtain as the master market manipulator than to own up to your mistakes."
- The Washington Post, May 9, 2013

"In 1995, the S&P 500 rose 14% from the beginning of that year through May 8. In 2013, it has also increased 14% year-to-date. Back then, the index never fell more than 3.7% in any given period throughout the year. A repeat performance would contradict the expectation that stocks are due for some sort of pullback."
- The Wall Street Journal "Morning MoneyBeat", May 10, 2013


"We surveyed banks, we combed the academic literature, we asked economists at central banks. It turns out that most of their models predict that we will enjoy historically high excess returns for the S&P 500 for the next five years."      -Federal Reserve Bank of New York Are Stocks Cheap? A Review of the Evidence", May 8, 2013 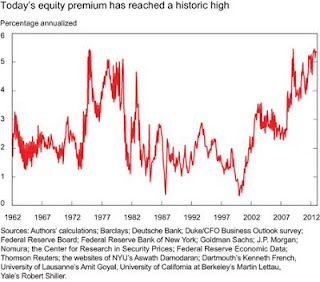 My personal investment account gained 95% in 1995.  I bought my house in 1994 and had three loans outstanding at one time as I was trying to capture a major bottom in the housing market to lock in low property tax base in great neighborhood.  I liked stocks so much in 1994 that I refused to sell any to finance my new house.

After I sold my old townhouse in early 1995, I used the funds to pay off two of the loans then used stock market gains to help pay  down the mortgage on my new home.  19 years later, I have very large capital gains on the home and get no sympathy from friends and family when I complain California and the federal government will "tax the heck" out of those gains if I want to downsize.
Key things I remember about 1995 is the housing market was making a major bottom in the 1994 to 1995 time period after the Savlings and Loan collapse.  The stock market LOVED the recovery in the housing market even though the economy did not feel like it was "booming" until many years later in 1999.

Note that
What do you think? To get more of my thoughts and my advice on how to invest for the future, read my investment letter.

Subscribe NOW and get the May 2013 Issue for FREE! !
(Your 1 year, 12 issue subscription will start with next month's issue.) 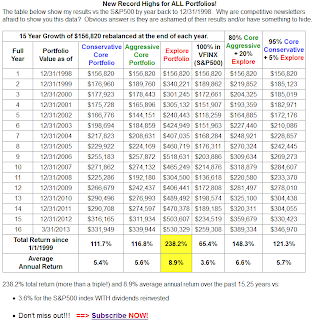 Posted by Kirk Lindstrom at 8:01 AM