Ticker Sense Low, Market Corrected 4.7% - Is the Bottom In?

Yesterday the S&P500 (Charts and Quote) reached a level 4.7% below its all-time record high.  At the same time, the Fear and Greed sentiment indicator hit a record low yesterday:
Notice on this chart how the S&P500 rebounded sharply after touching the dotted blue support line on my two graphs below.

S&P500 Charts with Resistance and Support

While I think a correction all the way down to the 200 day moving average, MA(200) on my charts, would make for a better, long-term low, I believe we have enough for a short term low now.

After taking profits in my positions when the market was hitting record highs, I started adding to my shares again this week with a new buy alert sent to my subscribers on Monday when this Ticker Sense chart indicated a possible low was close. 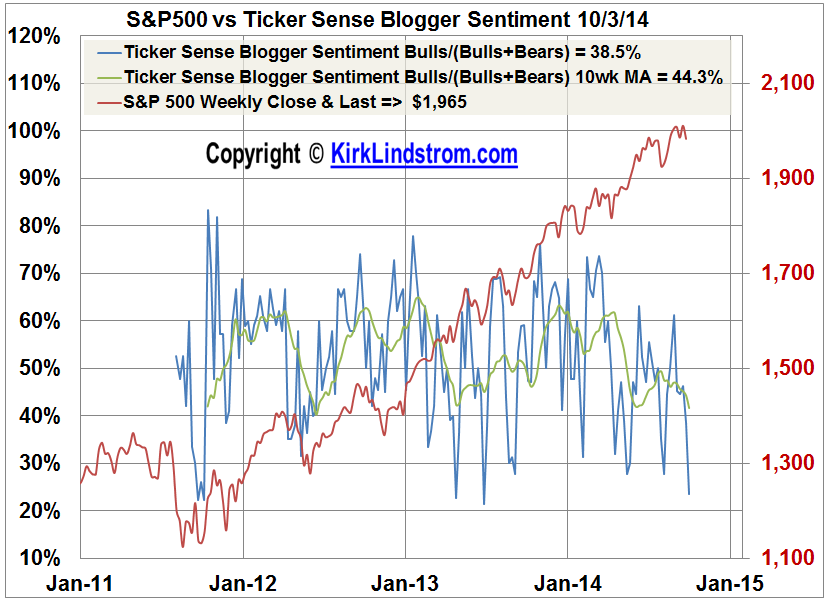 Ticker Sense sentiment is measured weekly and reported on Mondays so it often turns up AFTER a short-term bottom is made.

What do you think?

Will the market rally to a new high somewhere below the dashed red resistance lines on my top two graphs then make a bigger correction to the 200 day moving average?

New Feature for my Monthly Newsletter:

Posted by Kirk Lindstrom at 7:54 AM