Finisar (FNSR charts) VCSELs represent a ONE Billion Dollar opportunity now backed by Apple's (AAPL) investment to speed it along.

Loading up during this period of weakness, especially while under $20, worked out great for me and my subscribers!

It is nice when one sends an email from his phone when the market opened saying he's pleased with the buy at $17.55 earlier this month (when I had a buy at $17.50 that I used cash in my ROTH to fund.)

From Apple: Apple awards Finisar $390 million from its Advanced Manufacturing Fund
This is a very similar deal to how Apple gives money to Foxcon to make their iPhones.

To me, I believe Apple wanted a PR win with President Trump to show it is investing in manufacturing in the US and not just China.

Finisar is building in Texas to keep the technology in the US but in a low tax state not in the Silicon Valley where its headquarters is located.  If CA didn't have such high taxes, we might see this plant built up near Redding CA, just below the Shasta Dam where getting low cost renewable electricity would be easier than in Texas.

Market measured in Billions of Dollars:

The other thing I wanted to ask about is really from an industry perspective, your view of the addressable opportunity for the 3D sensing. So, not specific to what you think you are necessarily going ship but help us understand how you are sizing the market opportunity in 2018? And presumably, I want to ask about 2019, since given the timing of the ramp of the new facility, I have to imagine you are thinking about 2019 already.

3D sensing is essentially gigantic. If all the customers and the consumer space and the automotive space really build systems and deploy them as they are -- they have indicated to us recently, then, no matter how big this building is that we just bought, and fill it full of equipment, it’s unlikely that we can supply all of the demand that we’ll need to supply. So, I mean, it’s measured in billions of dollars and it’s really hard to project today that how many of these applications are people really going to field. But, I’ll just tell you, we are building arrays for a lot of different people in both mobile and in automotive, some of them are quite small arrays and some of them are gigantic arrays, so.

My best buy was near the very bottom of the worst bear market since the Great Depression: 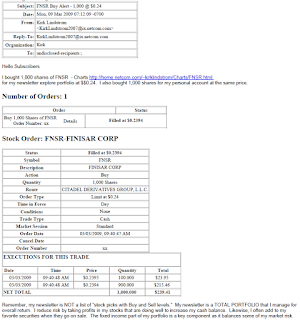 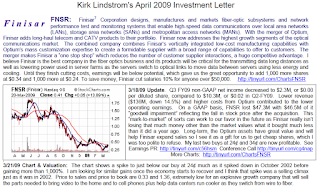 Kirk Lindstrom's Investment Letter
Subscribe NOW and get the December 2017 Issue for FREE!!!
(My SPECIAL ALERT emails will begin immediately plus access to all past issues while your 1 year, 12 issue subscription will start with the December issue. 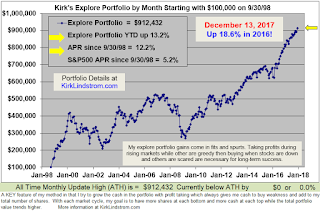 
Item 8.01 Other Events. Questions have arisen regarding news reports of Apple Inc.’s (“Apple”) announcement this morning regarding a $390 million award to Finisar Corporation (“Finisar”). Apple has not made a debt or equity investment in Finisar. The amount referred to by Apple represents anticipated future business between the companies over a period of time.