Thursday night on NBR, Hilary Kramer, Market Strategist & Author of "Ahead of the Curve: Nine Simple Ways to Create Wealth by Spotting Stock Trends" said she thought the bottom was in (DJIA closed at 12,270.17) and she saw value in the tech group where she recommended Sunpower (SPWR=74.25), First Solar (FSLR=164.74) and Apple Computer (AAPL=139.07).

KRAMER: Yes, Paul. I believe we have seen the bottom and we are going to now see a bull come back into Wall Street. We have formed a bottom and the reason we know that is that we finally had real buyers come in today. But we know it even more so because of what I saw this morning and yesterday, which is real fear. Fear took over and it over powered greed. Greed for so long was fueling the market, including as it was going down people buying into it.

KRAMER: But once that pessimism, a rational pessimism took over and the last of us capitulated because that's what Wall Street waits for. They wait for the very very last person who's holding onto their stock to give up and to sell and that's when the Street turns around and surprises you.

KANGAS: OK so a bottom we have seen. We might test it a couple of times, wouldn't you agree?

KRAMER: Absolutely. We may be testing and we'll be testing certain sectors.

To Paul Kangas's question "Where do you see value among the tech group?"

KRAMER: That's a great question, Paul. What I have been looking at are the solar technology companies. In particular there's a company called Sunpower. The ticker symbol is SPWR and it is off 50 percent from its high which was only a few weeks ago. Now Sunpower is reporting before the bell tomorrow and we could see Sunpower have some great guidance. If they say that there's a lot of demand out there for their solar modules and if that's the case, the whole solar sector may rise. 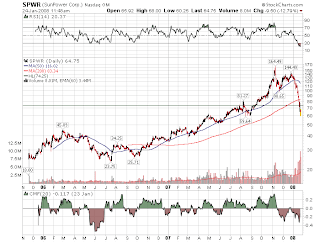 KANGAS: What else shines in your mind?

KRAMER: OK another solar stock, a different one called First Solar (FSLR) and it's a different technology, thin film technology, very efficient form of solar. And First Solar is also off 45 percent since December. It's unbelievable what has happened to these stocks because of momentum buyers became momentum sellers and shorters. So if Sunpower goes up, we will see First Solar go up. 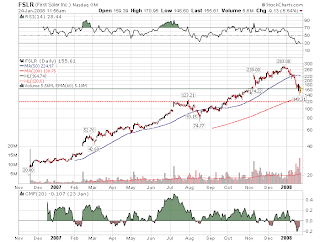 KANGAS: Very briefly one more. We have less than a minute.

KRAMER: I would like to talk about Apple (AAPL). This is very important, because as we know, Apple was $202 just recently and it closed today at $139 and it tested $126. I may go back into Apple. But what happened there is Steve Jobs is very conservative in giving guidance. But the key is, they are going to make inroads into the PCs because they can convert iPod users into desk top users and lap top users. 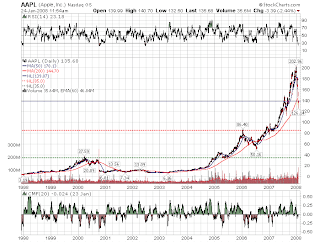 KANGAS: OK. Hilary, do you own any of the stocks mentioned?

KRAMER: Yes, I own First Solar. And Sunpower I do intend to buy tomorrow morning if the earnings come out strong.

Point and Figure Targets for

Disclaimer: I have no position in any of these stocks and have no plans to buy them at these valuations. (PE for AAPL=29, SPWR=370 & FSLR=125) I have been buying different tech stocks with PEs under 15.

Discuss this article at "Value and Growth Investing" in our facebook group called "Investing for the long term."
Posted by Kirk Lindstrom at 8:28 AM