Market lemming herders don't want you to know this, but everything may not be as it seems. 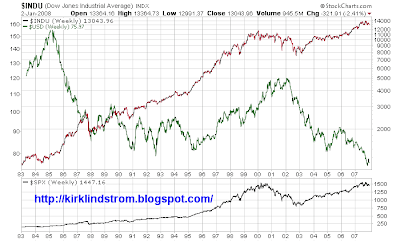 Am I the only one who gets really suspicious after the market is down 250 points in a day and it seems the loudest talking heads on TV "know" why it is and have ideas for "more of the same" on how to profit from it? When a good contrarian says something, it doesn't get the same attention. Maybe those with inventory to sell pay more for commercials?

Today's decline to start the new year was one of those days that makes me think the lemming herders were hard at work.

What if... Citigroup surprises everyone by NOT cutting the dividend, not writing off the worst case $18 Billion many analysts expect and not firing 10% of their staff when they announce earnings on January 15th?
What if... Oil, now that someone seemed to artificially print a trade at $100 just to do it, drops twenty, thirty or even fifty dollars in the next few months? After all, if the US dollar bottomed and starts to recover, then that should help bring down oil prices. The lemming herders are probably trying to get the last few off the cliff before they switch direction.

What if... we avoid a full blown recession as many analysists such as ECRI have been telling us is the most likely scenario?
What if....... the dollar really bottomed in November 2007? 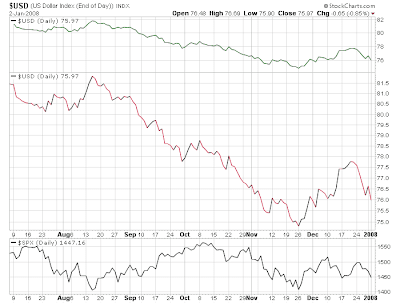 I heard BofA downgraded Intel from Buy to Hold with a target of $26. Intel ended 2007 at $26.66 and finished the first day of trading at 25.35, 65¢ below BofA’s target. It went from 66¢ above to 65¢ below the target. That is almost as funny as the big financial companies downgrading each other AFTER they lost 20, 30 or 50% on the subprime meltdown. If they did not have a clue about their own business, then how do they expect us to believe they have a clue analyzing something complex like semiconductors and semiconductor capital equipment?

Everyone last year seemed to love Amazon.com, Google, RIMM, Apple, HPQ and many other users of chips yet the chip companies in the SOX did poorly. These companies do not have products to sell without chips (or fiber optics to make the networks run fast).

I am not one to try and time the markets with more than a few percent of my portfolio but if any of my “what ifs” come true, it could be fun to be long.

How do you spell "Massive Short Covering Rally?"
Posted by Kirk Lindstrom at 5:55 PM