As of Friday's close, oil prices are up 103% in the last year. Investments that have done well with rising oil prices were correctly predicted in the book "The Oil Factor."

In "The Oil Factor," authors Stephen and Donna Leeb said if oil doubles in any 12 month period, then the best the markets have done 18 months later is a 4% gain and the worst is a 27% loss. Here are more 18 month S&P500 market returns over the next 18 months after the specified oil price changes:

The Leebs predicted higher oil prices and inflation were in our future, suggested the overall stock market could see trouble making large gains and suggested some investments they thought would do well with oil prices going higher and higher. They even suggested that gold could reach $1000 from its then price in the low $400s! (See Ch 12: "We even think it could reach $2,000)


"The Oil Factor: Protect Yourself AND PROFIT from the Coming Energy Crisis"
by Stephen and Donna Leeb
(Feb 2004)

Worth the price of the book for the historic data in a bar graph on pg 17, Ch2.

Their recommended assets included energy stocks, that included REITS for inflation and Warren Buffett's BRKA, have done quite well.

Obviously, the oil companies and gold have been great investements since their book was published in Feb. 2004.

I made good gains buying GeoGlobal Resources (GGR $3.27) in 2004 between $0.95 and $2.25. GeoGlobal is a Canadian natural gas driller operating in India. I took massive profits in 2005 selling most of my shares all the way up to the mid teens ($13.65) before GGR collapsed so I got my energy profits front-loaded (I took enough profits to buy a Prius or two) but the slow, steady gains in the energy stocks the Leebs recommended in their book have done great also.

Note: I have recently started to repurchase shares in GGR with the most recent newsletter and personal purchases on 4/2/08 at $2.65. (GeoGlobal discovered the largest natural gas field in deep water off the shores of India. The stock soard on the news. Delievery to customers was delayed significantly so the price collapsed back to prediscovery levels, where I hope it is an incredible bargain.)

I also own and have recommended REITS as a core position in "Kirk Lindstrom's Investment Newsletter" since early 2001. REITS have done very, very well as an inflation hedge. Vanguard shows $10,000 invested in their REIT index fund on 1/1/2001 is now worth about $30,000. 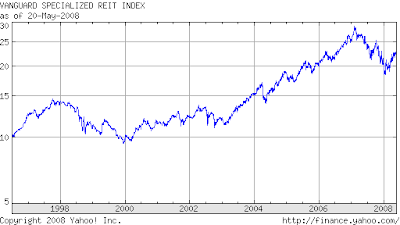 The above chart doesn't show the dividends reinvested. REITs currently pay an effective yield of 4.15%. For the last 5 years, VGSIX has averaged 18.17% a year through 4/30/08!

Now we should read:

The Coming Economic Collapse: How You Can Thrive When Oil Costs $200 a Barrel
by Stephen Leeb and Glen Strathy
(February 21, 2007)

Product Description: Stephen Leeb shows how hard times can be a boon for smart investors. As the world faces an energy crisis of unprecedented scope, renowed economist Stephen Leeb shows how surging oil prices will contribute to an economic collapse. With meticulous research and analysis, Leeb shows that due to strong competition from India and China, prices could soon double, a cost for which most countries and investors are ill-prepared. Now, in this groundbreaking book, Leeb not only shows how this crisis will affect consumers, but how savvy investing can turn these dire times into financial gain.

He was right, oil prices did double and the S&P500 has struggled. 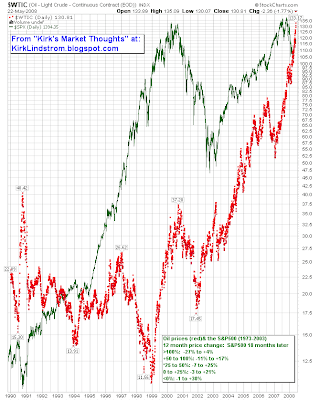 To find out how I've profited greatly from these difficult market conditions, subscribe to "Kirk Lindstrom's Investment Newsletter" today!

Posted by Kirk Lindstrom at 9:54 AM