Today the Economic Cycle Research Institute, an independent forecasting group based in New York also known as ECRI, said its Weekly Leading Index (WLI) fell to its lowest level in its six decade history. The WLI and its growth rate are designed to predict future turning points in the business cycle (recessions and recoveries.)
Today ECRI said its WLI fell to 110.9 for the period ending October 31, 2008. Last week WLI was 112.9 .

Commenting on the data, Anirvan Banerji, from ECRI said

"We are now in a severe recession."

"The leading indicators are showing no light at the end of this tunnel. In the last week of October they registered their worst readings in their six decades of history. It tells you the economy's not just down, it's plunging. There is no end in sight to this recession." 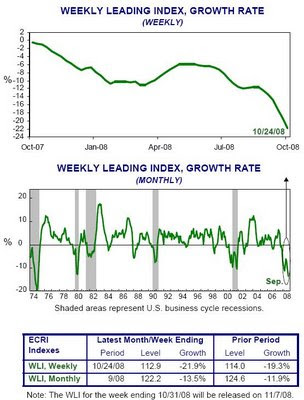