Today the Economic Cycle Research Institute, an independent forecasting group based in New York also known as ECRI, said its Weekly Leading Index (WLI) rose slightly from its lowest level ever recorded last week. In its six decade history, the lowest WLI reading was 110.9 released on November 7, 2008 for the prior week. The WLI and its growth rate are designed to predict future turning points in the business cycle (recessions and recoveries.)
Today ECRI said its WLI rose to 111.3 for the period ending November 7, 2008. Last week WLI was 110.8 .

Commenting on the data, Lakshman Achuthan, managing director at ECRI said "With WLI growth continuing to plumb new lows, not only is no economic recovery on the horizon, but the economy is falling off a cliff at its fastest pace in at least six decades." 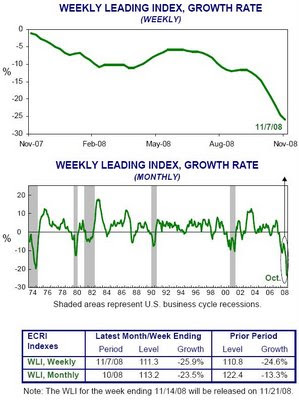 Date and graph courtesy of Economic Cycle Research Institute
Occasionally the WLI level and growth rate can move in different directions, because the latter is derived from a four-week moving average.