Jim Rogers was just on CNBC talking about the markets. Rogers said he covered his shorts last month. In the past, Rogers said was short the financials.
Jim said he hopes president elect Barack Obama will not raise the tax on capital gains at a time when capital is scarce. He postulated that only an idiot would do such a thing at a time like this and Senator Obama may have said this only to get elected.

When asked where to invest, Rogers said China. He admitted he did not take any profits in China before the crash but thinks investing in China now is like investing in the US 100 years ago. He said he has been investing in China since the 1990s. His belief is there will be major ups and downs in China but that is where the huge growth will come from so he is there for the long term. 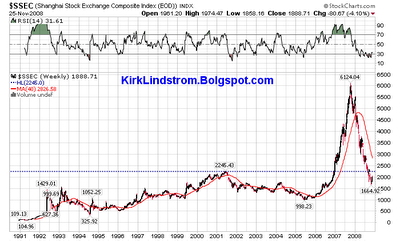 They pressed him to recommend one US stock to buy. Jim said he was buying airlines but paused and said they were international, not US based. Pressed again he suggested his commodity fund then said he owns US utilities and will probably buy some more of those.

If I missed anything Rogers said, then please post it in our comments section.

Posted by Kirk Lindstrom at 9:25 AM