Jim Rogers says he expects the actions by governments around the globe to save their economies will cause inflation and crash the US dollar. As such, Rogers is short long-term US Treasuries (US Treasury Rates at a Glance) and long silver.
Rogers has a good long-term record. For one, he has been short the banking stocks this past year as they have crashed and burned. Rogers was also a co-founder with George Soros of the Quantum Fund. " During Roger's ten years with the fund, the portfolio gained more than 4,000%, while the S&P rose less than 50%. 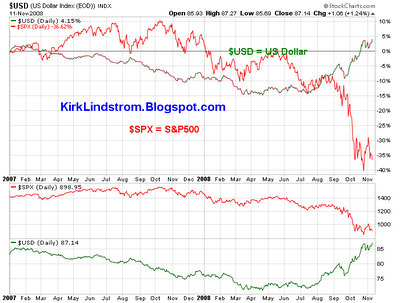 Rogers also said US government bonds are extremely overvalued.
Rogers explained that government economic rescue plans will force governments to issue more debt, print money and flood the markets with liquidity which will flare up inflation after the crisis is over and create worse problems.

Rogers says "zombie banks" kept alive by Paulson and Bernanke should be allowed to fail. He compared it to Japan which refused to let banks fail in the 1990s.
Rogers expects investors to return to precious metals as a hedge against inflation. 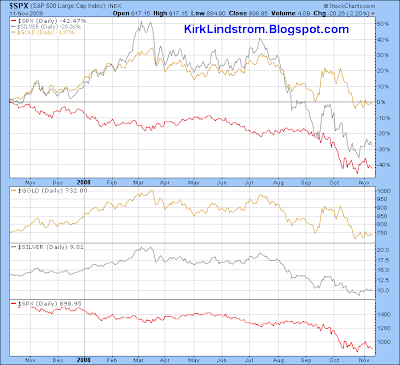 Rogers think gold may fall as central banks and the International Monetary Fund (IMF) sell the metal to raise cash.
Another way to hedge against high inflation is to buy TIPS or Treasury Inflation Protected Securities.

I recently bought Vanguard's TIPS fund (VIPSX Charts) which, like Silver, is down about 30% from its peak set earlier this year. As I describe on page 9 of the November 2008 issue of "Kirk Lindstrom's Investment Newsletter," I like to triple diversify the fixed income side of my asset allocation into
By having three fixed income buckets, I can rebalance after one of the buckets has a period of out performance. For more on that strategy, see " Using Asset Allocation to make money in a Flat Market."
Post your Comments on this story here
For more, see:
Posted by Kirk Lindstrom at 5:49 AM