Americans have an estimated $8.85 trillion in cash, bank deposits (CDs and savings accounts) and money market funds. [ A trillion dollars is one thousand times one billion dollars or one million times a million dollars! ] This is roughly equal to 74% of the market cap of the US stock market. 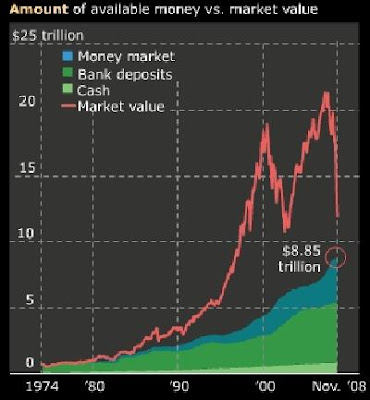 [Chart posted on SiliconInvestor and cites the Federal Reserve Bank of St. Louis and Bloomberg for the statistics.]
Americans have not had so much free cash available as a percentage of stock market value to buy stocks , houses or iPods and big screen TVs since the 1980s, over 20 years ago. 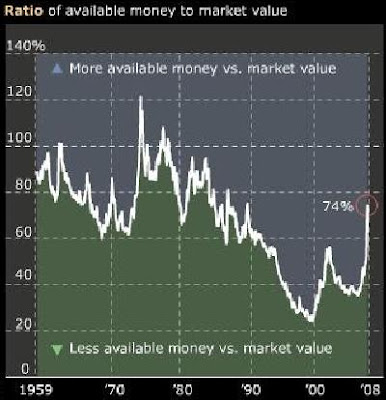 Some think this could signal a rebound for the stock market. The Bloomberg article states:

So-called money of zero maturity, the central bank’s measure of U.S. assets available for immediate spending, is mostly held by households, according to Richard G. Anderson, an economist at the Federal Reserve Bank of St. Louis.

“What the cash pile on the sidelines represents is dry powder,” said Fritz Meyer, the Denver-based senior market strategist at Invesco Aim, which manages about $358 billion. The firm’s $1.17 billion Aim Diversified Dividend Fund beat 96 percent of its competitors this year, and the $3.95 billion Aim Charter Fund topped 93 percent of similar mutual funds.

“Recovery in the second half of the year will probably play out,” Meyer added.

Any recovery will depend on a rebound in corporate profits and the economy after $30 trillion was wiped out from world equities this year, according to Frederic Dickson, chief market strategist at D.A. Davidson & Co. in Lake Oswego, Oregon.

...Gross domestic product will contract in the first half of the year before growth resumes in the third quarter, according to a Bloomberg survey of economists.

“The fuel supply is there, but people have to have a reason to use it,” said Dickson, who helps oversee about $19 billion. “The Fed fired the shot out of the biggest cannon they know. Now the question is, will it hit the right mark?”

A close look at the chart shows the cash stockpile was even higher when the great bull market began in 1982. The stock market could drop significantly from here to push the line in the second chart to its record level of just over 120% so I am NOT suggesting this is signaling a buy.

What the chart does show is there is a ton of money on the sidelines now compared to January 2000 when the great bull market ended and the secular bear market priced in gold began. 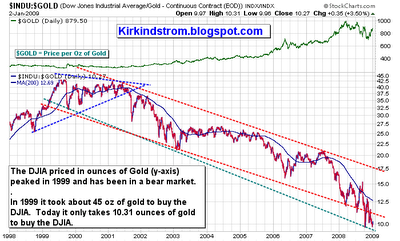 Click chart courtesy of stockcharts.com for full size image
At the very least, this large amount of highly liquid money is available to fund a significant rally at any time and it may have started already. I added shares to my "newsletter explore portfolio" last year near the lows and will look to take significant profits if this rally comes to be. I will also be watching the chart of the DJIA priced in Gold and many of my other sentiment indicators to get an idea when the rally is long in the tooth so I can sell at the best prices.

If you want to know what I have been buying in this period of weakness with my profit taking dollars from selling when the market was higher, Subscribe to Kirk's Investment Newsletter TODAY and get the January 2009 Issue for FREE!

Posted by Kirk Lindstrom at 7:56 AM