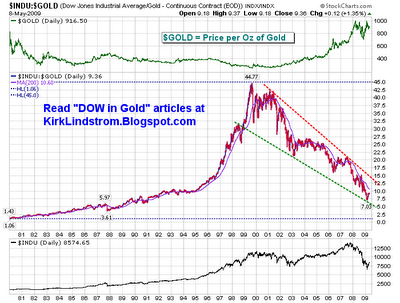 Which way do you think the DOW-Gold ratio is headed? Post your answer here.

The DOW/Gold ratio broke out of the "symmetrical triangle" pattern, explained below, when we entered our first recession and the markets were in the March 2000 to October 2002 bear market.

The good news is the chart shows the DOW:Gold ratio is very over sold.

This 200 Year Dow/Gold Chart courtesy of www.sharelynx.com (Click for full size image) shows the DOW/Gold ratio from 1800 through August 2008. 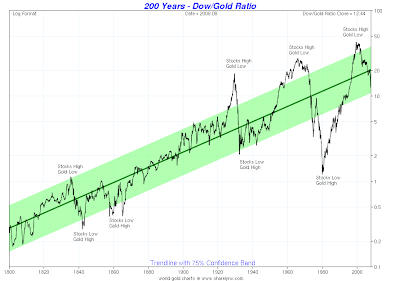 With the DOW:Gold ratio now at 9.36, it is trading below the green zone in the second chart. The ratio is oversold, but nothing says it can't get more "oversold."

US Treasury rates are so low, that they are paying less than long term inflation. See:
More on "Symetrical Triangle" chart patterns: The Bible for technical analysis, Technical Analysis of Stock Trends, by Robert Edwards and John Magee, says about 75% of symmetrical triangles are continuation patterns and the rest mark reversals. This book makes a great Gift!

Posted by Kirk Lindstrom at 1:49 PM