ECRI's WLI and its WLI Growth Rate Up Again.  ECRI says the US Economy will Avoid a Double Dip Recession
The Economic Cycle Research Institute, ECRI - a New York-based independent forecasting group, released their latest readings for their proprietary Weekly Leading Index (WLI) this morning. (More about ECRI)
For the week ending October 22, 2010

Yesterday  ECRI said  "The much-feared double-dip recession is not going to happen. That is the message from leading business cycle indicators, which are unmistakably veering away from the recession track, following the patterns seen in post-World War II slowdowns that didn't lead to recession.After completing an exhaustive review of key drivers of the business cycle, ranging from credit to inventories and measures of labor market conditions, we can forecast with confidence that the economy will avoid a double dip.

Note my chart for today shows the first estimate of Q3 GDP growth of 2.0%.  Q2 GDP was unchanged at 1.7%. Once again, ECRI scores a direct hit with WLI and WLI growth stabilizing before it was announced GDP was stable.
Chart of WLI and WLI growth vs GDP Growth 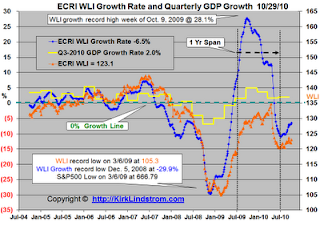 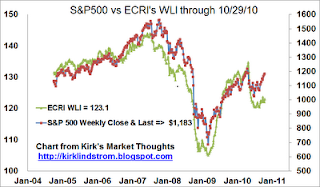 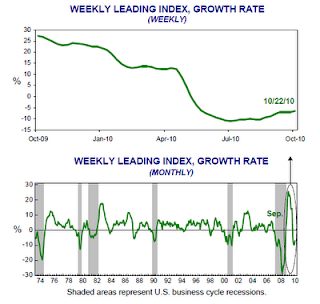 Posted by Kirk Lindstrom at 7:51 AM