Flat COLA: No Social Security Cost of Living Adjustment for 2011 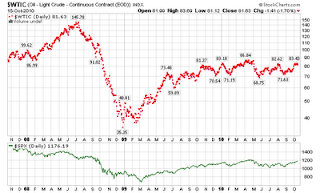 With oil prices the past three months about half their peak value, CPI is slowly catching up but still below the 2008 calculation. The good news for seniors is they benefited from a higher SS payment than they would have received if the 2009 COLA was set a few months later after the price of oil crashed to $35 at the end of 2008.


Here is a chart and current quote for crude oil prices.


Since this blow-up of CPI in 2008 due to high oil prices, I've reported CPI by month in my newsletter in a table so you can see what to expect. CPI peaked in July 2008 at 219.964. I show this value in Red. This September the CPI recovered to 218.439, still slightly below its 2008 peak. CPI for 2008 was only up 0.1% but Social Security beneficiaries got a 5.8% adjustment because of the spike in oil prices. They were very, very lucky to get a 5.8% raise while the rest of the country got fewer hours or lost jobs during the recession.
This table Automatic Social Security Cost-Of-Living Adjustments by Year clearly shows the January 2009 adjustment of 5.8% was the largest since July 1982!
Since actual CPI was effectively lower than what Social Security recipients were getting paid for, taxpayers were very generous to retired people at a very good time... during this recession. My guess is the CPI will make a new high in the next few months and COLAs will show up again next year for 2012.

Current Oil Prices and New Graph
Click for a chart and current quote for crude oil prices.
.
Posted by Kirk Lindstrom at 10:34 AM