Lakshman Achuthan, Co-Founder & Chief Operations Officer of the Economic Cycle Research Institute (ECRI - More about ECRI) appeared on CNBC this morning to discuss their economic outlook. The video is below.
In a nutshell ECRI remains bearish on the US economy with a continuing forecast for a recession. They believe economic growth doesn't really "muddle along" at sustained low rates.
Summary of Key Points:
Since September Recession Call, ALL of the data used to define recessions is slowing.
Put those into a COINCIDENT INDEX then it shows the growth has been slowing.  We have not had a decline like that in the Coincident Index without a recession in the last 50 years. 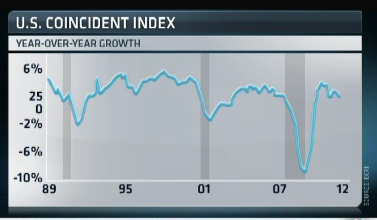 Joe Kernan pointed out the Federal Reserve must agree with Lakshman and ECRI because they continue to print money and keep rates low.
Lakshman says recession should begin by mid year 2012.  He says revisions in the data might say a recession has already started just like the last recession.  If the recession is starting now, then the consensus should figure it out in about six months (August.)


For more information, read:
Click to order their book

In 2004, Lakshman Achuthan co-authored "Beating the Business Cycle: How to Predict and Profit from Turning Points in the Economy"
Posted by Kirk Lindstrom at 8:12 AM