ECRI Calls it "A Recession of Choice"

A RECESSION OF CHOICE: A Special Report

We asked readers (see January 25, 2008: ECRI Says There Is A Window of Opportunity for the US Economy) to envision a large Roman stone column that has just started to topple. As the fall began, a modest push back would have been enough to right it again. But if its fall gained momentum, we warned, it would be virtually impossible to stop it from crashing down.

Make no mistake – the opportunity was there for prompt action in terms of both fiscal and monetary policy to avert this recession. At that juncture, prompt stimulus to boost consumer spending could have made a decisive difference, and policy makers seemed to understand. The Administration and Congress passed a tax rebate package with unusual speed, as officials noted that “time is of the essence.” Unfortunately, policy makers may not have understood what that really meant, since they were content to let the rebates start reaching consumers several months later, rather than demanding innovative ways to let stimulus reach consumers much sooner, as was needed.

For the purpose of averting a recession, several months is a lifetime – after all, the last two recessions lasted just eight months each. So, despite a unique opportunity, fiscal stimulus is likely to arrive too late to avert a recession.

And only this month, the Fed has finally begun to take aggressive and unorthodox steps to stabilize the housing and credit markets. While such actions met the need of the hour, they are unlikely to have the same impact today as they would have had a few months ago. In effect, an unusual opportunity to avert a recession was missed by policymakers.

Why was speed so important? Because uniquely in this business cycle, premature pessimism created a window of opportunity to right that stone column of the economy before it came crashing down. Normally you would never get this chance.

Sector Contributions to Slowdowns and Recessions 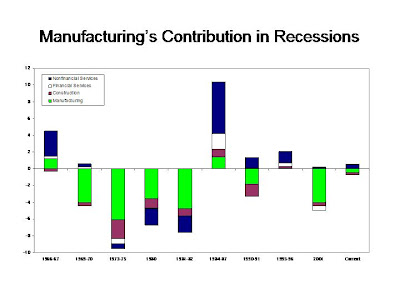 Recession expectations have been growing for a long time due to Fed rate hikes, followed by oil price spikes, a bursting home price bubble and the subsequent credit crisis. This premature recession fear caused consumers and businesses to rein in spending, creating the danger of a self-fulfilling recession prophecy. However, there is another side to the story.

As the chart shows, the biggest negative impetus in any recession comes from manufacturing, driven mostly by the inventory cycle. Typically, unaware of an approaching recession, businesses gear their production plans to expectations of rising demand. When demand for their products falls apart because of an unexpected recession, inventories surge, forcing sharp production and job cutbacks, thus reducing income and spending power. The spending cuts force further production cutbacks to work off the excess inventory.

This time around, premature pessimism induced them to slash business inventories. As a result, the cupboards were bare, and the manufacturing sector was primed for even a modest boost in consumer spending to force them to ramp up production and hiring, reversing the vicious cycle that is recession.

Had timely stimulus resulted in a quick burst of consumer spending, it would have forced manufacturers to ramp up production instead of reducing inventories, and they would not have been able to get the goods from China on such short notice. That is why prompt stimulus could have been unusually potent this time. But as we emphasized in January, the stimulus was “needed in a matter of weeks, not months.”

Separately, global pessimism about the U.S. economy, causing a major decline in the dollar, made U.S. exports much more competitive, bolstering U.S. export growth and further supporting production. Thus, the unusual drawdown in inventories and the boost to exports were the paradoxical results of widespread pessimism.

But the potential self-negating prophecy of a recession was not to be realized. Indeed, the process of spreading weakness that leads to recessionary job losses is now underway, and it is too late to head off the recession.

We know this because the weakness has now spread to ECRI’s leading index for nonfinancial services, a sector that accounts for five out of eight U.S. jobs. Even if the downturn in manufacturing, which accounts for one in ten U.S. jobs, is modest, we are likely to see sustained job losses.

It is a somewhat different story with regard to GDP, because the cyclically volatile manufacturing sector still accounts for 36% of GDP. A mild downturn in that sector should limit the decline in GDP in this recession.

In fact, we may or may not see two straight down quarters of GDP in this recession. But, contrary to popular belief, as we have detailed* elsewhere, that is neither a necessary nor a sufficient condition for a recession.

Some will rightly argue that recessions are cathartic and that to try and avert a recession with stimulus would be tantamount to rewarding the bad behavior of those contributing to the housing and credit bubbles. Perhaps, but we must also recognize that recessions bring with them collateral damage affecting millions of innocent bystanders.

The bottom line is that the outcome was not pre-ordained. Policy-makers had a choice about the speed with which stimulus took effect. If they had understood this, their actions could indeed have averted this recessionary downturn.

Feel Free to ask questions of ECRI Managing Director Lakshman Achuthan at our facebook forum ECRI - Economic Cycle Research Institute
Doubled Money in a Down Market!
Since 12/31/98 "Kirk's Newsletter Explore Portfolio" is UP 159% (a double plus another 59%!!) vs. the S&P500 UP a tiny 8.6% vs. NASDAQ UP a tiny 3.5% (All through )