Experts like Gartner are often no more reliable than throwing darts. Gartner was wildly bullish at the very peak in February 2000 and now is wildly bearish at the end of 2008 expecting semiconductor capital equipment sales to fall nearly 34% next year after they fell 30.6% this year.
According to their web site, www.gartner.com, Gartner Dataquest

"Gartner Dataquest tracks over 35 major IT and telecom markets, providing highly specific global and regional coverage of the key trends, issues, and most revealing statistics. With a detailed cross referencing of more than 30 Gartner research programs, Gartner Dataquest offers the single best way to understand risks and opportunities before investing or launching a product."

I think it will be interesting to track summaries of their forecasts for semiconductor capital equipment here in an easy to compare to past forecasts format. Below is my attempt that I will update when new forecasts come out.

Thanks to Jacob Snyder for thinking of this and gathering some of the data in this post.

14 February 2000 Wafer Fab Equipment and Capital Spending Forecast: How Exciting Will 2000 Be? The semiconductor recovery accelerated, and unit demand was better than expected. Spending for capacity additions began in earnest, initially in the logic-centered foundry industry, but is expected to broadly expand into memory in mid-2000.

2 October 2000 The semiconductor recovery is in full swing, driven by strong unit demand. Spending for capacity additions strongly accelerated in 2000, and positive growth is expected to continue into 2002.

January 7, 2002: Gartner Dataquest analysts believe 2002 will be the transition year to recovery, with the most likely scenario of a sustainable recovery for the semiconductor device and capital equipment industries occurring in the second half of this year. Demand is extremely weak in the equipment market, but Gartner Dataquest forecasts an acceleration in capital equipment spending driven by a tightening of leading-edge capacity in the second half of this year. Still, it will not be enough to contain the decline in equipment spending, as the market is forecast to decline 19 percent in 2002. (press Release)

18 December 2006 Semiconductor capital equipment realized solid growth in 2006, expanding 24.9% driven by double-digit expansion in semiconductor demand and a heating competitive investment race in memory. However, higher-than-expected inventories and a slowing macroeconomic environment will create a pause in 2007.

5 February 2007 Strong growth of 26.3% for wafer fab equipment in 2006, combined with strong inventories and soft demand, will lead to flat growth in 2007 as the industry pauses before another ramp-up in 2008.

18 May 2007 Semiconductor capital equipment spending will face a shallow correction in 2007, with sales revenue shrinking 3% from 2006. After this pause, growth will revive and reach 14.9% in 2008. Aggressive spending in memory still drives the market as manufacturers add capacity in response to growing demand.

6 October 2007 The back-end equipment market will realize a modest decline in 2007. A slight rebound is in place for 2008, with growth in the mid single digits.

11 January 2008 Semiconductor capital spending will register growth of about 5% in 2007 to $59.1 billion. Current expectations are that 2008 spending will be down about 13%, as memory spending contracts to compensate for excess capacity, specifically in dynamic random-access memory.

6 May 2008: Facing strong head winds from a weakening U.S. economy and a collapsing DRAM market, semiconductor capital equipment markets will contract in 2008 before staging a mild recovery in 2009.

18 August 2008: 2008 semiconductor capital spending will contract to $49.2 billion, which is more than 22% lower than 2007 spending of $63.4 billion. The 2008 capital spending contraction is being triggered by excess capacity, specifically in memory segments, as well as weak economic conditions worldwide.

16 October 2008: Worldwide semiconductor capital spending will decline nearly 26% in 2008. Instability in the memory sector, combined with a weak U.S. and world economy, will lead to a further drop of 13% in 2009.

10 November 2008: ...lowering our capital equipment forecast... Our new most likely scenario has revenue declining nearly 18% in 2009.

Barbara Van | Bob Johnson | Kay-Yang Tan | Klaus Rinnen
Worldwide semiconductor capital spending is expected to decline sharply in 2009 because of instability in the world electronics markets. Current expectations are that capex will decline by 34% compared with 2008. 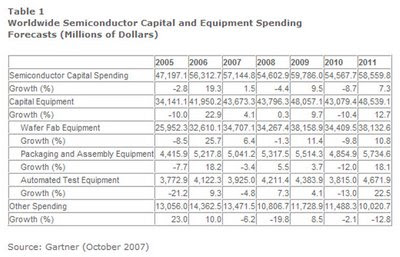 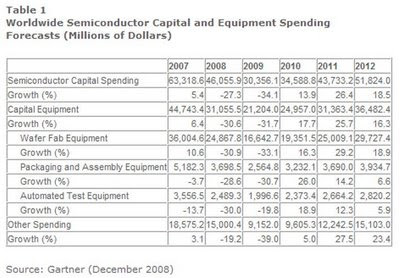 Posted by Kirk Lindstrom at 3:27 PM