CNBC's Ron Insana (profile and photo courtesy of CNBC) is folding the tent on his Insana Capital Partners L.P. hedge fund called "Legends." On August 8, 2008 sent a letter to his investors to announce they were closing shop and taking a job with Steven Cohen of SAC Capital.

"Our current level of assets under management, coupled with the extraordinarily difficult capital-raising environment, make it imprudent for Insana Capital Partners to continue business operations."

Ronald G. Insana left CNBC in March 2006 to set-up Insana Capital Partners L.P. This was a hedge fund known as a "fund of funds." Ron had the idea to use his fame to charge people hedge fund fees to select hedge funds. At the time I thought this was much like CMGI at the peak of the internet bubble. CMGI as an over valued internet holding company that invested in internet stocks then got a similar premium for its investments. According to the NY Times article, "Running a Hedge Fund Is Harder Than It Looks on TV," there was an advantage of paying Insana, access to great funds:

"His clients would be invested in SAC Capital, managed by Steven A. Cohen; Icahn Partners, managed by Carl C. Icahn; or the Renaissance Technologies Corporation, run by James H. Simons, perhaps the most successful hedge fund manager on the planet. These funds are typically closed to the public."

Insana raised $116 million and "only" lost 5% over a period the S&P500 fell more than 15%. This is good performance for someone like me who writes an investment newsletter that tries to beat the S&P500 but that is not the type of performance hedge fund investors pay for. To get the big fees, hedge fund investors expect their managers to have been short the market and show a profit. Of course, readers of my blog know I think market timing is next to impossible to do over and over so I rely on asset allocation and stock selection, but there seems to be an endless supply of suckers who will pay huge fees to take excessive risk. 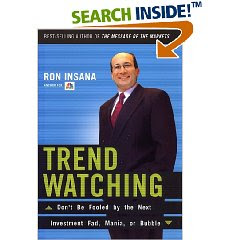 Hedge funds are great things to manage especially if you get the standard 2% of assets plus 20% of profits fee structure. The fee structure only benefits the manager and encourages excessive risk taking. For example: A savvy hedge fund manager could offer two funds called "Red Fund" and "Black Fund." He could take 2% of funds collected for both then take the money for each fund and put them on the red and black bets at Las Vegas. If Black comes up, he would get 20% of the winnings from the black bet plus the 2%. Even better, he'd be able to market that fund again to the investors to get more money to do it again since he was so successful. Of course the Red Fund investors would be very unhappy to have all their money vanish.

Ron shows an extreme level of arrogance as a commentator on CNBC so it must hurt him to have been caught in the hedge fund bubble after writing a book called “Trendwatching: Don’t be Fooled by the Next Investment Fad, Mania, or Bubble." I guess even the smartest people find the huge fees available to hedge fund managers hard to resist.