In an effort to end the worst financial disaster since The Great Depression, on Saturday the Bush Administration sent congress a $700 billion plan to purchase toxic debt from troubled financial institutions.

The Democrats, who control both the House and Senate, questioned whether there were sufficient protections for taxpayers and homeowners, but they acknowledged the need to act quickly. Some Democrats said they might use the opportunity to add some limits on what corporate executives are paid and look for ways to reduce home foreclosures.

Some details of the plan:
House Speaker Nancy Pelosi (D., Calif.) said, "We will strengthen the proposal by ensuring that the government is accountable to the taxpayers in any future actions under this broad grant of authority, implementing strong oversight mechanisms, and establishing fast-track authority for the Congress to act on responsible regulatory reform."

The Republicans praised the plan and called for swift action to enact the required legislation.

Treasury secretary Hank Paulson said "I am convinced that this bold approach will cost American families far less than the alternative -- a continuing series of financial-institution failures and frozen credit markets unable to fund economic expansion."

The stock markets liked the news and rallied Thursday and Friday, but they remain in bear market territory. See Market Update for September 21, 2008

I was a buyer Wednesday, Thursday and Friday. To learn what I bought for my newsletter explore portfolio, subscribe now! 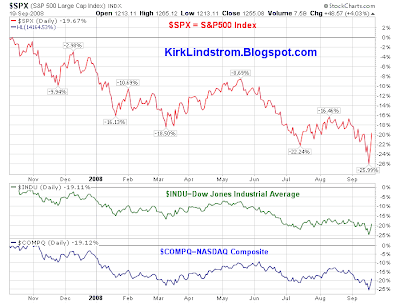 Posted by Kirk Lindstrom at 7:22 AM

Email ThisBlogThis!Share to TwitterShare to FacebookShare to Pinterest
Labels: Bailout